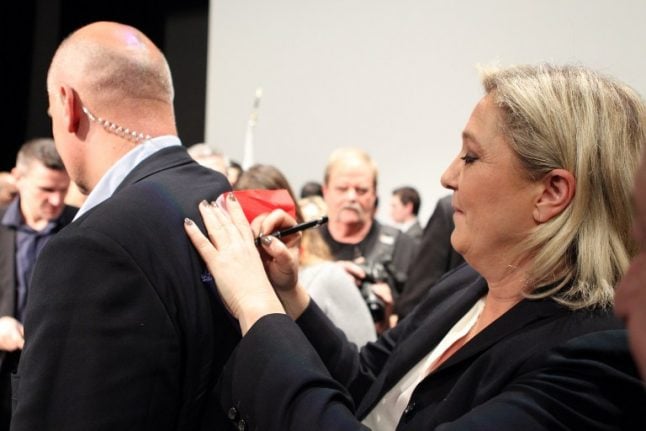 Photo: AFP
“It's a bare-faced lie. I never admitted to anything of the sort,” Le Pen told France Bleu radio during a campaign stop in eastern France, saying she had never even met EU investigators to discuss the matter.
Two French news outlets on Thursday published extracts from a report by the EU's anti-fraud office OLAF claiming that Le Pen admitted to illegally paying her bodyguard Thierry Legier with EU funds.
Le Pen, leader of the anti-EU National Front (FN), is a member of the European Parliament, which accuses her of defrauding it of nearly €340,000 ($362,000).
The parliament says it paid out 41,554 euros towards a three-month contract for Legier in 2011 in which he was falsely presented as a parliamentary assistant.
The OLAF report said that “the member of parliament (Le Pen) admitted that Mr Legier was never paid for this contract during the period in question.”
The report said Le Pen had justified Legier's contract as a way of getting parliament to reimburse her for unpaid salaries and expenses.
Le Pen on Friday admitted to “an accounting settlement” but denied that Legier's contract had been fictitious.
She is also accused of wrongly using parliament funds to pay a France-based FN aide, Catherine Griset, between 2010 and 2016.
Le Pen, who is riding high in polls ahead of the two-stage April 23-May 7 election, has steadfastly denied the claims, which have triggered a French fraud investigation.
Faced with her refusal to repay the money, the European Parliament has said it will start docking her salary in order to recover the funds.
The allegations against Le Pen have been drowned out by a fake jobs scandal engulfing her conservative rival Francois Fillon.
Fillon's campaign has been adrift since it emerged that his wife netted at least 680,000 euros for a suspected fake job as a parliamentary assistant over a period spanning 15 years. He has denied the allegations.