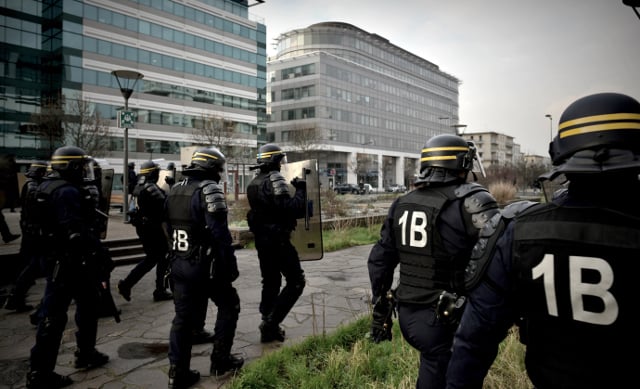 France’s police force has come in for fierce criticism in recent days sparked by an officer allegedly anally raping a young man named Theo with his baton in a northern Paris suburb.

Celebrities, street protesters and experts have lined up to condemn the French police, airing longstanding complaints about brutality and violence that are now decades old.

They are demanding a change to the way France is policed, especially in the country's poor banlieues.

Christian Mouhanna, a researcher at the CNRS who has studied policing in France for 20 years, tells The Local what needs to be done.

Mouhanna tells The Local that the fundamental principle of France’s police force is skewed. Officers are programmed to act to protect the state first and foremost, rather than serve the population.

The problem with this, Mouhanna says, is that when there is an element of the population that appears dangerous to them, such as the youths in the poor banlieues on the edge of France’s cities, then the state asks the police to control them “like a herd of sheep”. “They are not recognised as citizens,” he says.

“In so-called sensitive districts the police are like a de facto occupying force looking to control the population, not provide security to them,” he writes in an article for The Conversation. Mouhanna, who has presented his thoughts to MPs in the French parliament on numerous occasions, says that while country's like the UK are continually reflecting on the best policing methods, in France there has been no such contemplation since 2002.

“In the UK, while everything is not perfect, they are in constant search for improvement,” Mouhanna tells Les Obs site. “But in France we are about to give greater powers to the police without even thinking it through.”

He says that the British are shocked that relations between police and youths have not changed since the 2005 riots.

Police return to the streets

“Bobbies on the beat” is an expression that has been frequently used this week. Mouhanna is one of many academics who believes France’s police officers need to get back into the communities in the style of the old British “bobby on the beat”, which have since been replaced by the modern Safer Neighbourhoods Teams.

Since ex-president Nicolas Sarkozy became Interior Minister in 2002 the tactic of policing changed to “zero tolerance and a desire to create fear” in the high crime communities rather than have community policing, Mouhanna says. Since then “police officers are imprisoned by this mode of function”.

One issue raised is that the young officers tasked with policing poor banlieues like Aulnay-sous-Bois, which have populations descending from immigrants, have little knowledge or experience of these communities.

“They are recruited, they’ve never been to the suburbs, they’ve never seen large populations from Africa before who are living in poverty, and yet they are asked to follow this model of force first,” Mouhanna says.

Rogue violent officers must be reined in

There is an acceptance in France even among those demanding reform that certain bad apples or black sheep, “brebis galeuse” in French, have made things a lot worse for the vast majority of dedicated, well-behaved officers.

The video below that shows a police officer punching a high school student to the ground during labour reform protests last summer is just one of many incidents of a brebis galeuse that provoked much anger towards the police. Just like the one that showed the violent arrest of Theo.

One suburban youth named Chris told AFP that violence was often the norm.

“Unless you've grown up on an estate, you can't understand what it's like here. The police that we see are aggressive. Insults are normal, so is violence,” he said.

Mouhanna says there is a tendency in France “to forgive almost all police misconduct almost systematically and a priori, on the grounds that their profession is difficult.”

“The blunders and excesses committed by some officers have an immense impact on the daily work of others, and puts pressure on them to enter into the logic of confrontation,” Mouhanna says in The Conversation.

“If ethics have not succeeded in reining in some officers who repeatedly resort to violence, perhaps the law will eventually succeed in doing so,” he added.

Fight against racial profiling in stop-and-searches

This has long been a hot potato issue in France. President François Hollande promised to pass a law that would force police to provide a written receipt to all those stopped and searched as a way of fighting against racial profiling and discrimination.

“Even if this measure is not enough to fight against discrimination, it will enable us to have a better view of police activity and to understand how many people are stopped and searched, where and why,” says Mouhanna.

“The fact that Hollande has not succeeded or wished to do so shows how much the French police are reluctant to open themselves up.” Police chiefs need to listen to officers on the ground

One problem in the French police stems from the strict adherence to a hierarchy where police commanders essentially tell officers on the ground what to do and how to police, rather than allow those in the know to help decide priorities, Mouhanna says.

The strict adherence to a hierarchy, a custom observed in many walks of life in France, is causing a problem.

The expert says France needs to take a leaf out of policing in the UK.

“I’m not saying everything about the UK police is faultless but the officers on the street can play an important role in deciding the strategy,” he says.

In France, it’s the police chief who tells them what to do without discussing with juniors who may have a greater knowledge.

The police themselves also have many gripes and frustration against both their bosses and the government, which lead to unprecedented police protests last year. Repair the link to the Republic

For the youths of the suburbs, while they may be born in France, the words of the country's motto “liberté, égalité and fraternité are often meaningless.

Trying to repair this broken relationship with the Republic is not just a job for the police as it often starts when they fail in school, Mouhanna points out.

A problem that many point out is the danger that when the more vulnerable youths no longer feel respected by or have respect for France, they can be pushed towards religious extremist groups like Isis, as this report suggested.

But the police have an important role to play, even if it’s just a case of showing respect and using the polite “vous” form of you rather than the informal “tu” form – a common complaint aired against officers this week. (Who will protect us from the police? AFP)

Police must make the first move to improve relations and respect

While presidential candidates on the right like François Fillon and Marine Le Pen promise a crackdown on youths involved in riots, Mouhanna says the police must take the initiative.

“This respect between youths and police needs to be built,” he says. “We can’t just make a law and say to young people ‘if you don’t respect police you will go to prison’.

“If the police want respect, they have to think ‘how can we get it?’ It comes by being exemplary, then by listening to what the people have to say, which is not happening right now.”