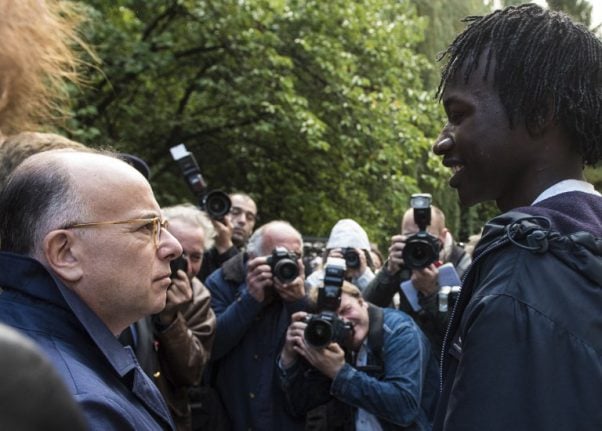 Current PM Bernard Cazeneuve meets a student at the inauguration of the programme in October, in his previous role as interior minister. Photo: AFP
They were chosen last year for intensive language lessons in the northern city of Lille — and a crash course in French university life and the chance to study for a career here.
Over 200 hopefuls who used to live in the huge camp near Calais, which once housed up to 10,000 people and was demolished last October, applied for the coveted slots at the University of Lille.
“I spent two months in the Jungle, and was only able to learn the alphabet,” said Abdul-Raouf Hussein-Fadul, a 26-year-old Sudanese man in a baseball cap and white sneakers who now ranks first in his class.
“I hope that one day I'll be able to become an engineer in France, like I was in Sudan… It's not easy, I'm going to have to work hard.”
The future students were recruited by university officials with the help of volunteer organisations at the camp.
When the Jungle was broken up, its thousands of remaining residents were bussed off to shelters around France. Initially there were fears of widespread resistance to the migrants elsewhere, but that has largely come to nought.
Applicants for the university programme had to already have been students in their home countries, have a course plan that was offered by the university — and give up their dreams of reaching Britain.
The lucky few were then split into four groups and put up in student housing, and are now taking 15 hours of language lessons each week.
'French is pretty difficult'
Mohsen Tajaddodi Paskiyabi, 28, left Iran in 2015, having played football for eight years before a knee injury forced him to quit.
He ended up spending a year at the camp in Calais before being picked for the new programme.
“I tried to learn French at the school in the Jungle, but there were lots of people so it wasn't really possible,” he said.
Once he has honed his language skills, Paskiyabi hopes to become a football coach.
“In January we had some tests, it was pretty difficult, since we've only been learning French for the past three months,” he said.
For the university, the goal “is to get their French as good as possible between now and June, so we can integrate them into the classic university curriculum in autumn 2017,” said Hugues Perdriaud, one of their professors.
'Like any other students'
The students are also getting help outside the classroom, from a network of fellow students volunteering their time.
“We talk with them in French to help them progress, but we also go to the library, to museums, go shopping,” said Solene, a 20-year-old pursuing an Italian degree.
“For us, they're just like any other students.”
Most of the students already have refugee status, and advisers are helping them chart a path toward careers that match their experiences — as well as the realities of the French labour market, said Emmanuelle Jourdan-Chartier, a history professor and one of the architects of the project.
“They are extremely motivated, very capable — they were very proud to get in to university and they genuinely want to integrate successfully,” she said.
For Djamel-Eddine, a 26-year-old from Sudan, “French is complicated because there are lots of exceptions” to the rules.
But he has found a trick: “I've watched 280 episodes of 'Helene et les Garcons” (Helene and the Boys,” a French sitcom from the early 1990s.
He had been at the Jungle since August 2015, trying several times to climb onto trucks and get into Britain, without success.
“So I gave up and in the end, I like it here, even if it rains a lot in Lille — I've made a lot of friends, and now I'm looking for a job for the school breaks,” he said.
Adam, a student from Darfur who counts himself “very lucky” to have got in, has also found help from listening to the French rapper Black M and the Belgian star Stromae.
But hope is not lost for those whose French might not be good enough to start class next September: They will be able to take another year of language classes.
As Nathalie Ethuin, another professor involved in the project, said: “They wouldn't be the first students to finish their first year in two years.”
By the AFP's Zoé Leroy