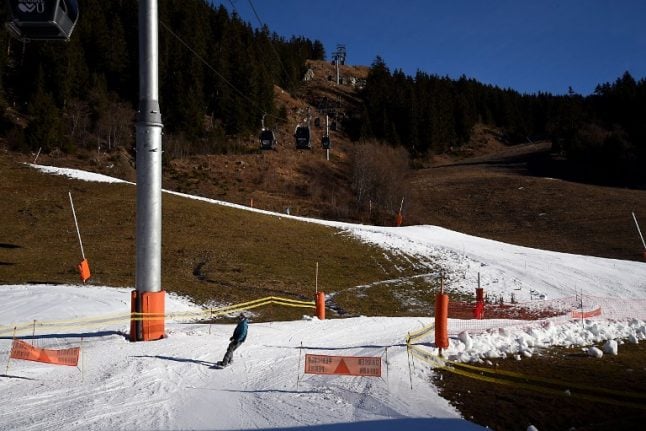 Photo: AFP
Most climate models predict increased winter precipitation due to global warming, scientists wrote in the European Geosciences Union (EGU) journal The Cryosphere.
But with temperatures rising too, the is likely to be in the form of rain rather than snow.
Based on mathematical climate modelling, they predicted that “the duration and mass of the snow cover in typical Alpine catchments… will shrink until the end of the century”, even in best-case climate scenarios.
“Bare Alpine slopes could be a much more common sight in the future,” the EGU said in a statement.
Boosted by long-awaited snowfall in January, parts of the Alps, currently hosting the World Ski Championships, are finally covered in snow.
But the Swiss side of the mountain range had its driest December since record-keeping began over 150 years ago, said the EGU. 2016 was the third year in a row with scarce Christmas snow.
And things are set to get much worse, said researchers at the Institute for Snow and Avalanche Research (SLF) and the Laboratory of Cryospheric Sciences, both in Switzerland.
If humankind succeeds in limiting average global warming to two degrees Celsius (3.6 degrees Fahrenheit) over pre-industrial levels, the loss of snow cover would be 30 percent by 2100, the study found.
But if nothing is done, the figure grows to 70 percent.
We determine how much
“The fact that we lose 30 percent of Alpine snow cover with the 2 C global warming scenario is sad, but at the same time encouraging compared to the 70 percent,” said study co-author Christoph Marty of the SLF.
The 2C goal is the mainstay of the Paris Agreement to curb warming by limiting emissions of planet-warming greenhouse gases from burning coal, oil and gas.
The duration of the ski season will shorten too, the study found. As temperatures rise, the period when natural snow is deep enough for winter sport could start up to a month later than it does today.
And the ski area will shift.
“If we don't cut emissions, enough snow for winter sports can only be guaranteed above 2,500 metres (8,200 feet),” said the statement.
The team used weather data and different warming scenarios to simulate snow cover projections.
They found that snow will decline in all scenarios.
“The Alpine snow cover will recede anyway, but our future emissions control by how much,” warned Marty.