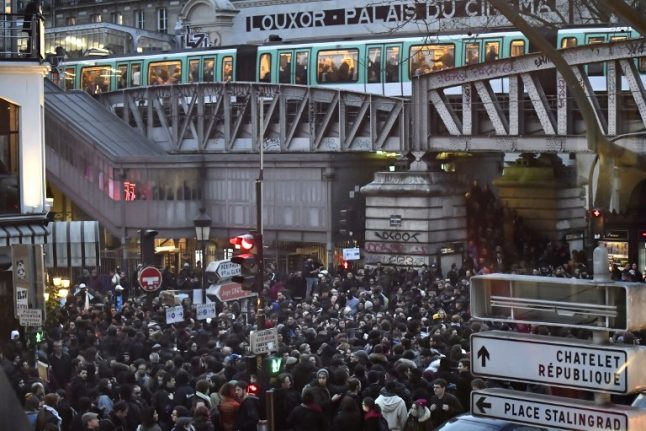 All photos: AFP
Wednesday night saw protesters gather in the 18th arrondissement of Paris, near the Barbes-Rochechouart Metro station to the north east of the city.
Police estimate that around 400 people turned up at the flash protest around 6pm, that appeared to have been organised by antifascist and anarchist groups via social media.
The demonstrators were protested against the treatment of a young man known as Theo, who was allegedly raped with a truncheon during an arrest in the northern suburb of Aulnay-sous-Bois.

Apparently things calmed in #Barbes whilst some tweets are inciting to continue. #JusticePourTheo pic.twitter.com/saGASXZqpk

Some held signs reading “Justice for Theo” and “Solidarity with the suburbs”. They also chanted “Everyone hates the police ” and 'the police are racist”.
Riot police warned local residents to stay clear of the area and blocked the protesters from heading towards Stalingrad. At around 7pm, the protests turned violent when some of the demonstrators threw projectiles at police, who responded with tear gas, reported the BFM TV channel.
By around 8pm the demo had dispersed but Le Parisien newspaper reported that there were incidents of vandalism in other parts of Paris that may have been linked to the protesters.
Similar anti-police protests kicked off on Wednesday night in Rouen, to the north of France, where 21 people were arrested.
The tensions began in Aulnay-sous-Bois to the north east of Paris, after police allegedly raped the 22-year-old Theo. One officer has been charged with rape and three others with violence.
A preliminary police investigation said there was insufficient proof to support the rape allegations. The victim was hospitalized and needed surgery. He was advised by doctors to take two months off work.
Protests have since spread to other suburbs around Paris, but also other cities around the country including Rouen, Toulouse, and Nantes in recent days.
On Tuesday President François Hollande called for justice for Theo but said the there was no excuse for the violence.
READ ALSO: Why the French banlieues are ripe for repeat of 2005 riots