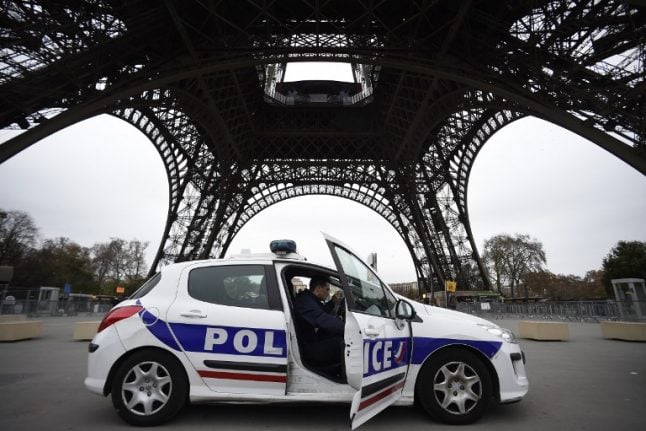 Photo: AFP
The three — arrested on Friday near the coastal city of Montpellier — were identified as Thomas Sauret, 20; his partner, a 16-year-old minor named only as Sarah; and Malik Hammami, 33.
They were indicted on Tuesday for “criminal association in connection with a criminal terrorist enterprise”, the sources said.
Computer and telephone equipment seized in police searches suggest that the Eiffel Tower could have been among the potential targets, although “at this point, there is nothing indicating a plan for a clearly defined target,” a source close to the inquiry said.
On Thursday last week, the day before the group was arrested, Paris authorities announced plans to build a bulletproof wall of glass around the tower.
Two of the terror suspects were also charged on Tuesday with making and possessing explosives in an organised group.
The case is being handled by anti-terrorism investigators, the sources said.
The three had been spotted several weeks earlier for using Telegram, an encrypted message system preferred by jihadists, they said.
Police swooped on Friday after the teenager pledged allegiance to the Islamic State group in a video on social media and she and Sauret, both converts to Islam, bought acetone and hydrogen peroxide — precursors of an unstable, homemade explosive called TATP.
Police raided a flat in Clapiers, north of Montpellier (pictured below), and found 71 grams (2.5 ounces) of TATP, the sources said.
“An imminent terrorist act was being prepared,” Interior Minister Bruno Le Roux said on Monday. The flats where the suspects were arrested. Photo: AFP
The suspicion is that Sauret planned to blow himself up and his partner would flee to the Iraqi-Syrian area before the attack took place.
Sauret had been placed under house detention at his father's home in the eastern region of the Ardennes from December 2015 to December 2016 after trying to head for Syria, the source said.
Hammami had been allegedly approached over the internet by Sarah, who sought an Islamic “tutor” to help her prepare for marrying Sauret.
Hammami is described as a father of two who was going through a divorce and had a long record of drug offences. He had been a prominent poster of extremist messages on social media, the source said.
A 26-year-old man had also been among those arrests that were announced on Friday, but he was released the following day without further action.
France remains on high alert after a wave of attacks that began two years ago, claiming more than 200 lives.
On February 3, a soldier shot and wounded a machete-wielding attacker who lunged at him outside the Louvre museum in Paris while shouting “Allahu Akbar” (God is greatest).
One of the most active members of the US-led coalition fighting IS, France has been the worst hit among European countries targeted by attacks claimed or
inspired by the Sunni extremist group.
Parliament voted in December to extend a national state of emergency until July 15, after this year's presidential and parliamentary elections.