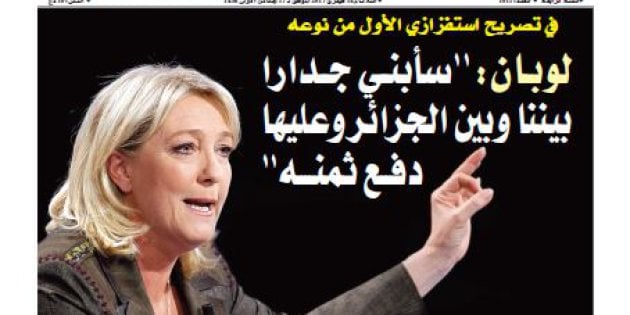 Forget about fake news causing problems, what about joke news?

France’s spoof news site Le Gorafi pulled off another sting this week when its tongue-in-cheek story about Marine Le Pen’s plans for a wall around France was taken seriously in Algeria. Readers of Algerian daily El Hayat would have struggled to digest their breakfast on Tuesday morning when they woke up to front page headlines that anti-immigration National Front leader Marine Le Pen planned to build a wall around France and make Algiers pay for it.

The pic below shows the headlines in El Hayat. While the story may be a spoof it neatly combines the reality of Donald Trump’s controversial plan to make Mexico pay for a wall along the border and Marine Le Pen’s well known desire to halt immigration into France.

Earlier this month she spelled out exactly what she has in mind for France under her presidency, including a drastic cut in immigration and a vow to restore France's hard borders.

Clearly happy with itself, Le Gorafi joked that that it had bought El Hayat newspaper as part of its global media strategy.

The wall sting is not the first time Le Gorafi has duped foreign media.

In 2013 a Gorafi story claimed that most French men thought the clitoris was a Toyota model tricked members of the Italian media into mocking the naivité of their Latin rivals in France.

At least six Italian news outlets rushed to report, with relish, the “findings” of the TNS-Sofres survey mentioned by Le Gorafi, whose name is derived from the (real) French newspaper Le Figaro.

“89 percent of French men confuse the 'clitoride', which in French is called the 'clitoris', with a car from the Japanese car manufacturer Toyota,” declared leading Italian news agency ANSA.

“Probably a confusion with the Toyota Yaris,” they helpfully explained in a story they placed in the “Motoring” section of the website.

READ ALSO: French First – What 'President Le Pen' has in mind for France