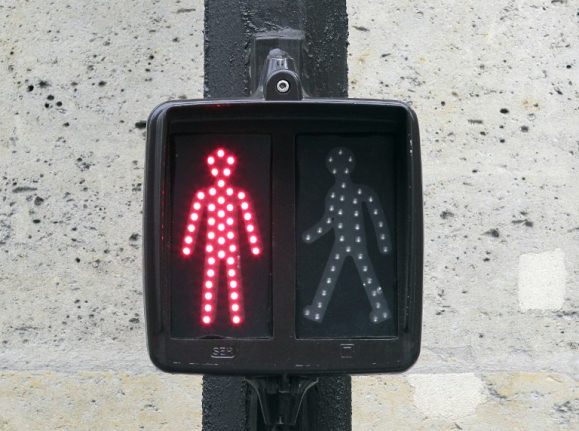 Would you cross? Photo: AFP
Four times out of 10, French pedestrians cross the road when the lights are against them, according to a paper published on Wednesday.
In disciplined Japan, though, the rate is 20 times lower.
Cedric Sueur of Strasbourg University in eastern France led a team that analysed behaviour at three pedestrian crossings in Strasbourg and four in the Japanese city of Nagoya.
The researchers recorded 3,814 crossings in Strasbourg and 1,631 in Nagoya.
The rulebreaking was vastly different between the two countries — in France, 41.9 percent of crossings took place against a red light, but this was just 2.1 percent in Japan.
Men and young people aged 20-30 were more inclined than women and older people to cross illegally. Different degrees of social conformity explain the gap in behaviour between the two countries, researchers reported in the journal Royal Society Open Science.
“The French have less respect for the rules… We are less concerned with social approval,” Sueur told AFP.
“It's not that the fear of a ticket is bigger in Japan than in France. It's that people (in Japan) are more concerned about the opinion of others.”
The role of group behaviour on pedestrian traffic is a major factor in safety, the study found.
Such research “could help target specific preventive, culture-specific solutions for pedestrian safety,” it said.
Road safety in France is a topic that will get many motorists' blood boiling, especially among the expat community.

In fact, when we asked for French drivers' worst habits via our Twitter and Facebook channels, one reader even said there weren't enough Twitter characters to list them all.
The worst habits of the French motorists, at least according to our readers, are excessive tailgating, driving on the wrong side of the road, misbehaving scooter drivers, horrific parking efforts, and an extreme overuse of the horn (to name a few).
Read the full list of the ways French motorists drive expats crazy.