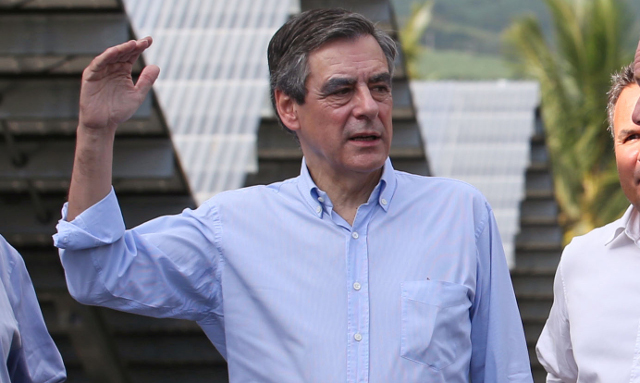 Centre-right presidential candidate François Fillon has fought doggedly to hang on to his presidential bid ever since the scandal surrounding’s his wife’s alleged fake jobs hit the headlines two weeks ago.

While police continue their investigations into allegations his wife Penelope was paid hundreds of thousands for her role a “fake” parliamentary assistant, there was more pressure on Fillon on Tuesday from both the polls and his own party.

A new survey carried out by Odoxa, revealed his popularity had plummeted by 10 points in February to 22 percent, which put him in tenth place in the popularity league table of French politicians, notably behind rival candidates Emmanuel Macron and Marine Le Pen.

The Odoxa poll even revealed Fillon was haemorrhaging support among his usual backers – those on the right, where his popularity rating has dropped by 14 percent to 63 percent.

The worrying poll comes as a group of MPs from Fillon’s Les Republicains party met on Monday night to demand a solution to the ongoing crisis.

Fillon has previously called on his MPs in his party to unite behind him but there are many who are not prepared to do so.

Lead rebel MP Georges Fenech has described how it has become impossible to campaign for Fillon in their constituencies due to the public anger surrounding Penelope Gate.

Fenech, supporter of ex-president Nicolas Sarkozy has called on Fillon to “take responsibility”, which presumably means step down and allow someone else (perhaps Sarkozy?) a run at the presidency.

“That is why we must inform François Fillon of our most serious concerns and ask him what are we going to do now. We need to know what’s next?” said Fenech.

Another MP Alain Gest said: “We must find a political solution that meets this challenge because we are in danger of facing the unbelievable situation that our political party could be absent from the second round of the presidential elections. This is not acceptable.”

And Les Republicains senator Alain Houpert spelled out clearly what needed to be done: “We need to change candidate. We need to have the courage and honour to do it.”

It is believed around 40 MPs from Les Republicains party are prepared to sign a “declaration” addressed to Fillon to make him aware of the problem both they and he faces.

The latest polls suggest the runoff vote on May 7th will be between Marine Le Pen and Emmanuel Macron.

Fillon and his party face an uphill battle to find that solution but on Tuesday he told his party's MPs on Tuesday there was no “better alternative solution” than him.

“The withdrawing of my candidature would create a major crisis,” he said.