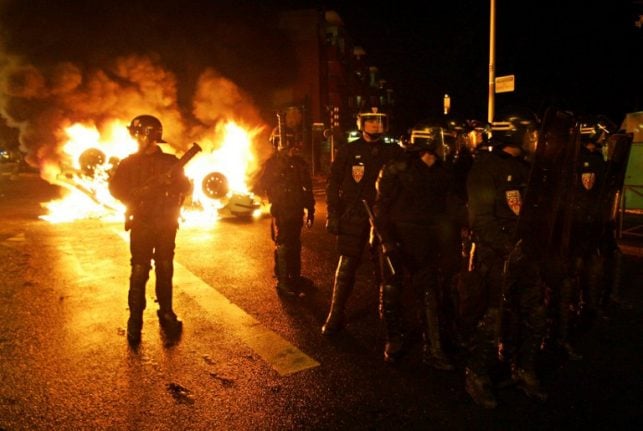 A scene from the 2005 riots. Photo: AFP
Sunday night saw around 50 violent protesters take to the streets of Argenteuil in the north western suburbs of Paris. Police arrested 11 protesters who vandalized bus shelters and torched cars.
Later in the night, far on the other side of town, protesters went on the rampage in Les Ulis, in the department of Essonne, to the south of Paris.
They attacked the local police station, torching three police cars, and threw Molotov cocktails, reported Le Parisien newspaper.
The night before, on Saturday, 2,000 protesters took to the streets of Bobigny in the north east, where police were forced to use tear gas to disperse crowds. A shop in Bobigny that was vandalized on Saturday night. Photo: AFP
All this follows protests that started about a week ago after police allegedly anally raped a 22-year-old man named Theo in Aulnay-sous-Bois, to the north east of Paris.
A preliminary investigation said there was insufficient proof to support the rape allegations. The victim was hospitalized and advised by doctors to take two months off work.
On Monday, a police source told Le Parisien that the resulting tensions were reminiscent of a dark chapter in the history of the Paris suburbs.
“With this Theo case, we're getting the feeling that the riots of 2005 are going to kick off again,” the source told the paper.
The 2005 riots in the Paris suburbs saw France forced to declare a state of emergency as youths rioted in poor suburbs across the country. Bobigny on Saturday night. Photo: AFP
The fierce rioting began after the death of two teenage boys, who – after running from police – scaled a fence to hide in an electricity substation and were both electrocuted.
The boys had done nothing wrong, but were reportedly accustomed to harassment by police.
The peak of the ensuing riots came on the night of November 6th, 2005, when 274 areas were affected. Three nights later, the government called a state of emergency.
By the time calm was restored on November 17th, 10,000 cars had been burned, 300 buildings destroyed or vandalised, two policemen shot and injured, and 6,000 people arrested.