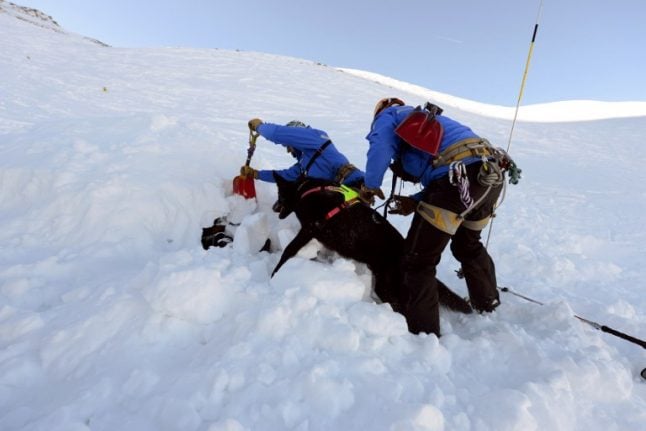 A file image of an avalanche rescue team in the Alps. Photo: AFP
The huge cascade of snow and ice, some 400 metres (yards) wide, was apparently set off by a group of skiers higher up the mountain, the station said in a statement.
The four victims were from a group of nine people — eight holidaymakers and a guide — who were skiing off-piste when the avalanche hit.
A rescue official from the nearby town of Albertville said a search was underway for the five others.
The five were initially feared buried under a huge mass of snow but it
later emerged that the group may have split in two before the avalanche, meaning they may have escaped the accident.
The avalanche was the deadliest of its kind in the French Alps since the start of the winter.
Last month, 29 people died in Italy after an avalanche buried a hotel in the central town of Rigopiano. Photo: Google Maps
'Slab' avalanche
Staff in Tignes, which is situated near the Italian border, witnessed the wall of snow barrel down the mountain and raised the alarm at around 10:35 am (0935 GMT) on Monday.
Rescue workers and sniffer dogs backed by two helicopters rushed to the scene, located at an altitude of 2,100 metres (6,900 feet).
They initially said they had found two people dead and two alive.
The police said the two found alive appeared to have died shortly after being rescued. Monday's avalanche risk in the area was listed as three on a scale of five, meaning there was little risk of a spontaneous large-scale avalanche.
The ski station said it was a “slab” avalanche, caused when densewind-packed snow breaks off.
Before Monday, 13 accidents had been recorded in the Alps and Pyrenees so far this winter, claiming a total of three lives.
One of the worst avalanches in the past decade took place in the summer of 2012 in the Mont-Blanc range. Nine climbers from Britain, Germany, Spain and Switzerland were killed as they tried to scale the north face of Mont Maudit.
Avalanches can travel at speeds of up to 400 kilometres (250 miles) per hour.
The force of the impact of last month's avalanche in Italy has been calculated by police as being equivalent to the three-storey stone and wood structure being hit by 4,000 fully loaded trucks.