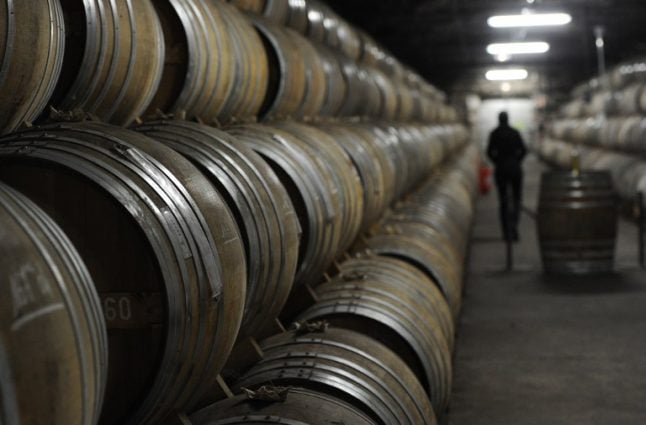 Photo: AFP
Sales abroad rose 1.2 percent to €11.9 billion ($12.7 billion) last year, with spirits making up a third of the total and Cognac alone hitting an all-time export high, according to the French Federation of Exporters (FEVS).
The figures showed that while the amount of wine sold declined — France fell behind Italy as the world's biggest wine producer two years ago — the product that was sold was of higher quality than in previous years and hence sold for a higher price.
Alcohol is now France's second biggest export sector after the aerospace industry.
Cognac was the star product in 2016, showing a 5.5-percent rise in sales, with drinkers in the United States happy to pay premium prices and Chinese customers rediscovering their taste for luxury, too.
Wine sales dropped 1.8 percent, continuing a downward trend in terms of volume, and in value.
The post-Brexit vote drop in the value of the pound hit the important British market, with a sharp 10-percent drop in wine sales.
However, France's main market, the United States, was strong and accounted for 2.8 billion euros of business, equivalent to one quarter of the overall sales, “mainly thanks to a euro-dollar parity that was favourable to our exports”, said FEVS president Christophe Navarre.
China returned with a bang after a lean few years, with a 12.7 percent rise in sales, but French wine producers said they feared the key Chinese market was fragile.
“Our competitors such as Chile have agreements with China, where they no longer pay any customs taxes, while we still pay quite high taxes,” said Philippe Casteja, a Saint-Emilion-based producer, who was speaking on behalf of Bordeaux wines.
Url copied to clipboard!