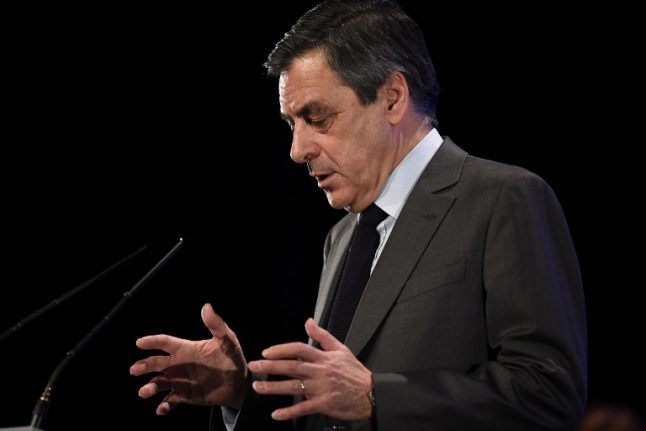 Photo: AFP
The lawyers said the two-week-old investigation into the payments to Penelope Fillon, who was hired by her husband as a parliamentary aide, was “invalid” and “completely tramples democratic principles”.
The investigation dealt a “serious blow to the principle of the separation of powers” between the judiciary and the legislature, lawyer Antonin Levy told a press conference.
Levy and fellow lawyer Pierre Cornut-Gentille argued that Fillon enjoyed discretion in the use of funds available to him as an MP and that the probe into misuse of public money was therefore “totally inapplicable”.
“The absence of such an offence makes the financial prosecutor's office incompetent to investigate and the investigation is therefore illegal,” Levy said.
He also criticised constant leaks about the investigation to the media which he said were damaging to his client and likely to have an impact on the two-round presidential election in April and May.
“The financial prosector's office has a responsiblity. It's important that voters don't have their election stolen in April,” Levy added.
Their complaint could fall on deaf ears, however, as the prosecutor's office is not obliged to respond.
Fillon's presidential bid has been thrown into turmoil by revelations that his wife was paid hundreds of thousands of euros over 15 years for a role she is suspected of not having fulfilled.
The conservative former prime minister — who had been leading the race before the story broke but is now shown trailing in third — insists his wife did real work in his Sarthe constituency in northern France.
On Monday, 62-year-old Fillon admitted to committing an “error” by employing his wife and apologised to the French while maintaining his wife's earnings were “perfectly justified”.
Welsh-born Penelope was paid over 800,000 euros before tax ($860,000) over three periods between 1988 and 2013 to act as an assistant to her husband and his deputy.
Fillon also used public funds to hire two of his adult children when he was a senator, paying them 84,000 euros ($91,000) pre-tax between 2005 and 2007.
Charles and Marie Fillon were questioned by investigators on Monday over the affair.
Sinking ratings
The usually unflappable rightwinger, who won the Republicans nomination on a promise to slash public spending, claims he is the victim of a plot to prevent the right returning to power after five years of Socialist rule.
But while managing so far to retain his party's support, polls show French voters souring on him in an election seen as a referendum on the political class.
An Elabe survey of 1,050 people this week showed Fillon's approval ratings falling 13 points in a month, to 22 points.
Polls show centrist candidate Emmanuel Macron, 39, and far-right leader Marine Le Pen stand to benefit most from his woes.
Former economy minister Macron, a relative newcomer to politics who has drawn large crowds at his rallies, is shown stealing past Fillon in the first round of the election in April, qualifying for the run-off round against Le Pen on May 7.
While Macron is tipped for victory at the final hurdle, analysts says all bets are off in an election dominated by the anti-establishment sentiment that
fuelled Brexit and Donald Trump's rise to the White House.