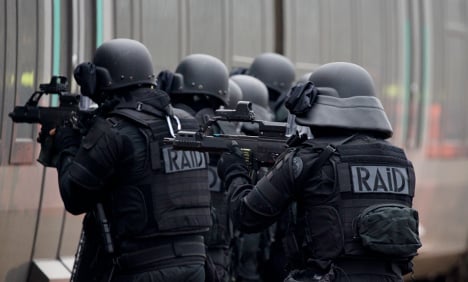 File photo: AFP
Officers from France's counter-terrorism organisation SDAT made the four arrests in Montpellier and Sete on the southern French coast early on Friday morning.
Interior Minister Bruno Le Roux said police had foiled an “imminent attack on French soil”, just the latest in a long line of thwarted plots in recent months.
He confirmed that homemade explosives were found by police.
The male suspects were reportedly aged 21, 27, 34. Police also arrested a 16-year-old girl who was known to police for having expressed a desire to travel to Syria. She had reportedly pledged allegiance to the terror group Isis.
One of the arrested men was described as her “mentor” and was being closely watched by French intelligence services, a source told AFP.
Police found 71 grammes of the explosive TATP in the apartment as well as acetone and a litre of sulphuric acid.
“The four suspects were arrested after they bought acetone,” a police source told AFP, referring to a highly-explosive liquid that can be used to make bombs.
“It seems that they intended to go through with it and to make several explosive devices,” the source said.
A separate source told L'Express newspaper: “We think they had a project ready to carry out, but at this stage we do no know where or when.” (The southern French city of Montpellier)
France remains on high alert after several high profile terror attacks in recent years.
Tourist sites in Paris have been forced to up security and Friday's raids come just one week after an Egyptian man shouting Allahu Akbar attacked French soldiers patrolling outside the world famous Louvre museum in Paris.
Last September also saw a botched attempt by three female jihadists to blow up a car outside the Notre Dame Cathedral in Paris.
Friday's arrests also come just months after seven were arrested by counter-terror police in Strasbourg and Marseille over a separate terror plot.
It is believed that terror plot was aimed at carrying out an attack at Disneyland Paris.
Interior Minister Bruno Le Roux has said that French authorities have foiled “no fewer than 13 plots involving more than 30 individuals”, including women and minors, since the Bastille Day truck massacre in the Riviera city of Nice that claimed 86 lives.