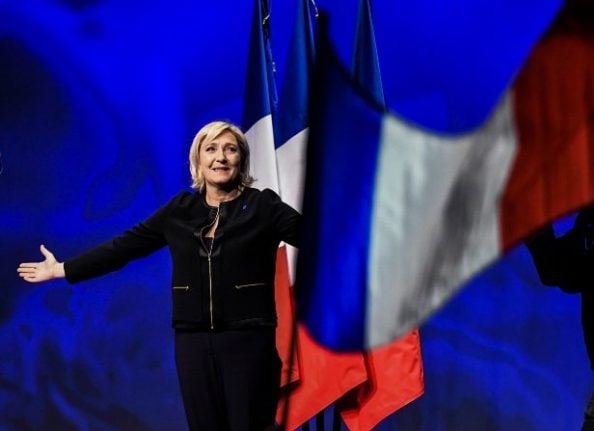 Le Pen's promises set out what policies she would enact (or at least try to) if elected as president in May, (which, after Donald trumped the US and the UK dumped Europe is now considered a near realistic proposition.)

The 24-page document outlining her pledges isn't exactly light reading, so here's a summary of some of her key points and includes other election pledges she has made to the media.

Included in Le Pen’s outline for her presidency are promises to “defend national identity”. These comprise defending the “values and traditions of French civilisation”, as well as “promoting our cultural and historical heritage”.

“We will be all about the local, not the global,” Le Pen has said (presumably not referring to our website).

But she also wants her “priorité nationale” inscribed in a revised French constitution.

Le Pen has spoken in January about plans to make foreigners pay for their own healthcare for the first two years of living in France, even if they’re paying into the system just like French people.

“Someone who arrives legally should wait some time before benefiting from the reimbursement of health costs,” Le Pen told RTL radio.

When grilled on live TV about an example of how it would work in reality she confirmed that if she became president a German worker for example, who had been in the country less than two years, would effectively have to go home to be treated for any health issues or pay for them in France, despite the fact they paid contributions like any French worker.

In December, she also caused a stir by saying that the children of illegal immigrants should not have the right to free education in France.

She also proposes a tax on the recruitment of foreign workers in order persuade companies to prioritize hiring French job seekers.

The National Front leader also said this week she wanted to scrap the automatic right of foreigners to become French through marriage. However she was left embarrassed when everyone pointed out there was no automatic right and that partners have to wait four years and meet several criteria, included a certain level of French language ability. She wants to reduce net immigration to 10,000 maximum and end the right of families to join their immigrant relatives in France.

If elected, she plans to scrap the right to citizenship for anyone born on French soil, and make it “impossible” for illegal immigrants for gain citizenship or legalisation as well as simplifying the deportation process.

Le Pen also advocates the automatic deportation of foreign criminals, once they have been convicted.

Marine Le Pen does not like Europe and has vowed to take down all the EU flags from public buildings and put up French ones.

Short of calling for an immediate referendum on France's EU membership, Le Pen proposes “monetary sovereignty”, by which she means leaving the Eurozone and re-establishing the Franc, the old national currency, that would exist alongside the Euro.

A “Frexit” referendum would then only come if things don't work out in her favour in negotiations with the EU concerning France’s monetary, economic, territorial and law-making independence. The National Front candidate is for “massive” rearmament of law enforcement as well as a plan to recruit an extra 15,000 police and military police. She also wants to loosen the rules about when officers can use their arms.

But despite her previous claim to want to re-establish the death penalty, Le Pen doesn’t mention this in the promises, instead vowing to introduce “real” life sentences of up to 30 years in prison.

Le Pen plans to step up France’s laïcité (a French concept of strict secularism), extending the 2004 ban on wearing the Muslim veil (and other religious symbols) in schools and public buildings to all public places.

This idea has drawn much ridicule and anger from opponents, who believe it will simply be impossible for the already stretched police forces to enforce and will alienate France's Muslim community. Much of Le Pen's economic pledges centre around protecting French businesses and French farmers and fisherman from foreign competition, including barring any foreign goods that don't meet the required French standards.

In a bid to woo older voters she wants to cut the retirement age to 60 and cut inheritance tax, and to create a “fair economy” she plans to make all the French pay taxes and stamp down on tax evasion. She also wants to introduce a tax for large business groups.

A critic of austerity measures, Le Pen promises to cut household taxes and up welfare benefits, according to her this would be paid for by decreasing immigration and withdrawing from the EU.
She also plans to bring the Bank of France under state control and print more money to pay off France's debts.

In order to protect the French language, Le Pen would scrap the 2014 Fioraso Law which enabled more courses in French universities to be taught in foreign languages, notably English. It was designed to help France attract more international students.

While Le Pen does not say how, she would do this, she just states that the French principle of “Republican assimilation” – meaning foreigners must adopt French culture at the expense of their own, must be promoted over the idea of simple “integration”.

Le Pen would walk away from Nato “so that France is not dragged into wars that are not hers”.