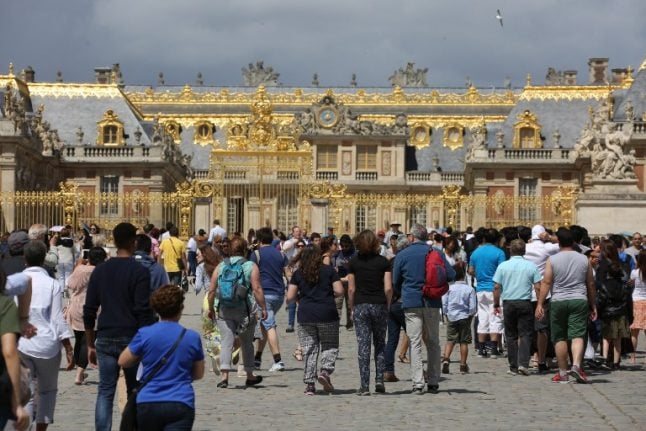 Tourists at the Palace of Versailles during the summer. Photo: AFP
France attracted between 82.5 million and 83 million foreign visitors last year, maintaining its rank as the world's top tourist destination despite a series of jihadist attacks, its foreign minister said on Friday.
The figure fell short of the record 85 million who visited in 2015, and Jean-Marc Ayrault warned that “a great deal of work remains to be done to ensure France remains a global destination.”
“France has suffered as a destination,” Ayrault told a press conference in Biarritz, the southwestern surfing and casino hub.
“2016 was an exceptional year, with attacks, storms and strikes,” Ayrault added.
“There was a definite impact, especially on Japanese tourists.”
Three years ago, French tourism chiefs set a target of attracting 100 million visitors a year to the country by 2020.
Ayrault's announcement is in line with figures from France's national statistics agency Insee.
It reported earlier this week that the number of overnight stays in France rose 3.9 percent in the last three months of 2016 compared with the same period in 2015, reaching 56.3 million. But France has been repeatedly targeted by jihadists since the January 2015 massacre at the Charlie Hebdo satirical weekly in Paris.
Tourist numbers in Paris have especially declined since it was targeted in November 2015 when 130 people were killed by gunmen and suicide bombers from the Islamic State group.
In 2016, a radicalised Tunisian rammed a truck through crowds watching July 14 fireworks on the seafront in the southern city of Nice, killing 86 people.
Two weeks later, an elderly priest was murdered by two jihadists near Rouen in the north.
Just last week, a machete-wielding man was shot and wounded when he lunged at soldiers patrolling outside the Louvre in Paris, one of the world's most visited museums.
Investigators say they are trying to establish whether the 29-year-old Egyptian had links to radical groups.
On Thursday, the city of Paris announced plans to erect bulletproof glass walls to protect the Eiffel Tower, considered one of the most vulnerable potential targets for attack.
Detailed tourism figures will be published in March.
The only statistics currently available show a 10 percent drop in hotel bookings in Paris in 2016, with Asian visitors down sharply as a result of fears linked to attacks.