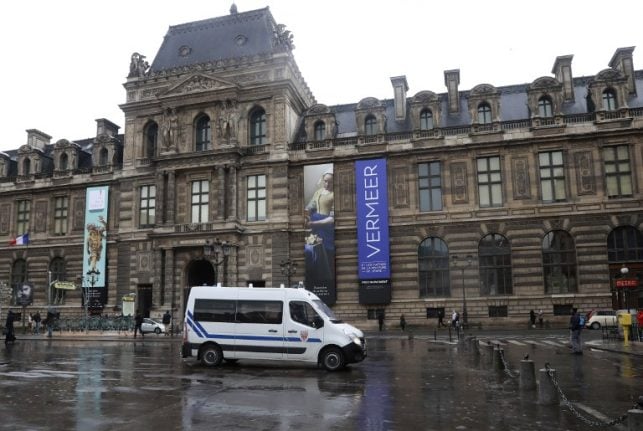 Photo: AFP
Police have confirmed him as Abdallah El-Hamahmy, a sales manager resident in Dubai, who has denied being guided by the extremist group during interrogations.
He said that he “acted on his own will” and planned only to damage artworks as a symbolic assault on France, the source said, asking not to be named.
Although his backpack contained spray paint which could have been used to deface artwork, investigators believe he appears to have “a certain sympathy for the ideas of Isis,” the source said.
In Friday's attack at the world's busiest museum, Hamahmy was shot after lunging at four soldiers with machetes in the underground ticketing area while shouting “Allahu Akbar” (God is Greatest).
Hamahmy, who is recovering in hospital, is likely be charged once medical staff say he is well enough to appear before a judge.
The son of a retired policeman entered France legally on January 26 on a flight from Dubai and was staying in an apartment rented by the week in an expensive Paris district near the Champs-Elysees, sources say.
Investigators are examining a Twitter account thought to his which sent out a dozen messages in Arabic between 9:27 am and 9:34 am, just minutes before the attack.
“In the name of Allah… for our brothers in Syria and fighters across the world,” one said.
Another post asked: “Why are they afraid of the creation of a state for Islam? Because the state of Islam defends its resources and the honour of Muslims.”
Hamahmy's father Reda El-Hamahmy, a retired police officer, told AFP in Cairo that his son had shown no sign of having been radicalised.
He said the family was relatively well off, with Abdallah earning a law degree in the Nile delta city of Mansoura in 2010 before moving to Dubai to become a sales manager.
The father said the suspect's wife was pregnant with the couple's second child and was currently in Saudi Arabia.
The Louvre assault revived fears of violence in France, which suffered a string of attacks that killed 238 people between January 2015 and July 2016.