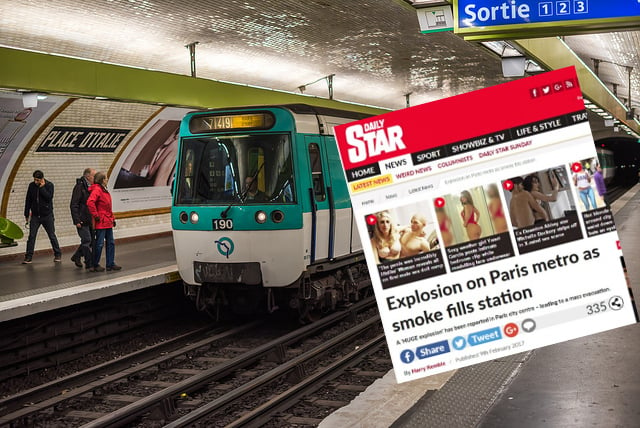 Photo: PR180.2/Flickr
The electrical fire broke out at the Place d'Italie station on Line 6 at around 9.15pm, with passengers evacuated immediately.
Two people plus the driver of a nearby train were treated for smoke inhalation, Paris transport chiefs RATP said, and the station was closed until 1am.
The fire itself lasted for around 20 minutes.
While some passengers took to social media to report hearing an “explosion”, the RATP said the noise was just the start of the electrical fire.
It explained that the bang was just the sound of an electrical arc, which is a discharge of current formed by a strong current jumping a gap in a circuit, and which started the fire.
While French media downplayed the story, foreign press was quick to give it dramatic headlines at a time when the city is on edge over the fear of terror attacks.
British paper The Daily Star went as far as to call it a “HUGE explosion” (their use of caps, not ours). The Daily Mail, which has just been ruled an “unreliable source” by Wikipedia, put the injury toll at eight, rather than three, and also went with “explosion” in the headline. Later in the same story it quoted a police spokesman who said there was “no explosion”.
Papers as far afield as Australia called it an “electrical explosion” that “sparked fears of fresh terrorist attack”.
It's safe to say that France's anti-terror police were not investigating the incident, with the RATP saying the problem was left for the maintenance team to fix.