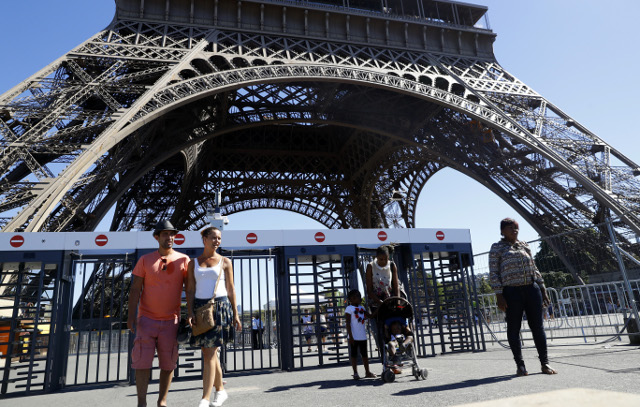 Photo: AFP
If you’ve been past the Eiffel Tower lately you may have noticed that it’s surrounded by an unsightly metal fence.
The unattractive structure is a temporary security measure that was introduced before the Euro 2016 football tournament, but which has hung around until now.
But instead of pulling down the barriers, authorities will instead replace it by another wall – made out of glass.
“The terror threat remains high in Paris and the most vulnerable sites, led by the Eiffel Tower, must be the object of special security measures,” said deputy mayor Jean-Francois Martins, who is in charge of tourism at the Paris City Hall.
The glass walls will prevent individuals or vehicles storming the site visited by six million people each year, he added.
Paris has long feared attacks at tourist sites and has grappled with the need to protect its visitors, not least after a failed terror attack in September at the Notre Dame cathedral and last week’s machete attack near the Louvre museum without scaring them or ruining the beauty of its most famous attractions.
Martins said the city would replace the metal grills on the northern and southern sides with glass panels, which will allow Parisians and visitors to enjoy “a very pleasant view” of the monument from the Champs de Mars and the Pont d’Iena.
The glass walls, which will be bulletproof, will be 2.5 metres high and of course transparent so as not to ruin the aesthetic beauty of the city’s top tourist attraction.
They will run along Quai Branly and Avenue Gustave-Eiffel. The project is expected to cost around €20 million, Le Parisien paper reported.
But it’s not only a new look – the wall will also change the entry process for visitors.
While those hoping to climb the tower can currently enter the tower area from the two parallel streets mentioned above, they will soon have to go through the gardens.
And anyone hoping to just stroll under the tower like they did in the old days, well, you can forget it.
The glass wall will mean that everyone will have to pass through security checks, even if they weren’t planning to climb the tower at all.
Not all Parisians are happy about the new wall either, including 37-year-old Sarah.
“What a shame. While I can understand the security aspect, this new plan is going to spoil the area a bit,” she told the paper.
“The best way to enjoy the tower is to see it from underneath. It will be annoying if you can’t get there easily, especially for people who have travelled from abroad.”
The new wall is not the only upgrade the Eiffel Tower is getting.
Last month Mayor Anne Hidalgo announced a €300 million facelift for the Iron Lady, which is mainly aimed at shortening queues and improving the experience for visitors.