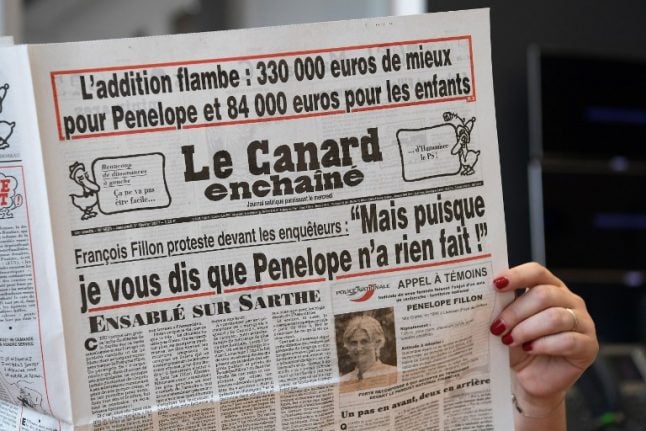 Photo: AFP
But as its “fake job” claims against presidential hopeful Francois Fillon show, “The Shackled Duck”, which last July celebrated 100 years in print, has hardly lost its bite.
Although circulation has fallen to about 400,000 copies in 2015 from 500,000 in 2010, its sales have spiked in tandem with its most explosive claims: The edition detailing the money paid to Fillon's wife, dubbed “Penelopegate”, quickly sold out an estimated 500,000 copies.
But Le Canard Enchainé refuses to post its reports on its website. It accepts no advertising. Its journalists are its only shareholders, and its finances are among the healthiest in the French media landscape.
And every Tuesday night, politicians send couriers to the paper's Paris offices ahead of Wednesday's public distribution, hoping they won't be the  subject of its skewering reports. The Fillons. Photo: AFP
'The opposition'
Created to take an anti-war stance during World War I, the Canard Enchainé long styled itself a “satirical” paper happy to deride the foibles of the famous, before shifting its focus towards investigative journalism in the 1970s.
In French a “canard”, or duck, is the colloquial name for a newspaper, while the chains refer to the heavy press censorship of the war.
For years, hardly any of its rivals could match its stream of scoops, some of them uncovering the most infamous political scandals in French history.
Even with a relatively small newsroom that relies heavily on freelance contributors, the Canard punches above its weight, with sources ranging from diplomats and judges to corporate executives and whistle-blowers.
Among its most prominent victims in recent years: Herve Gaymard, a finance minister who had the state pay for a huge luxury duplex even though he owned a Paris apartment and Michele Alliot-Marie, accused of too-cosy ties with Tunisia's president Zine El Abidine Ben Ali as the country's revolution erupted at the end of 2010.
“The Canard is neither right-wing or left-wing, it's in the opposition,” Erik Emptaz, a co-editor in chief, says in a documentary airing on French TV on Friday.
Politicians of all stripes are among its most devoted readers, and sometimes its sources.
“We quickly turn to Page Two,” where snippets of government gossip fill the page, Roselyne Bachelot, a former rightwing minister (pictured below), says in the documentary.
“I've told them a few things myself,” she adds with a smile. Roselyne Bachelot, a former rightwing minister. Photo: AFP
And President Francois Hollande was often called the Canard's “junior editor in chief” when he was head of the Socialist Party.
The paper's scoop about Fillon's wife could be one of its biggest yet in terms of fallout.
Fillon, a conservative, was leading the presidential race until the Canard revealed that his wife had been paid more than 800,000 euros ($860,000) over 15 years for a suspected fake job as a parliamentary aide to Fillon and an ally.
Polls after the story broke showed him falling back into third place, behind far-right leader Marine Le Pen and centrist candidate Emmanuel Macron, with Macron tipped to ultimately emerge victorious.
Fillon has lashed out at the Canard and other media that carried the story, declaring himself the victim of a “lynching” while admitting that he made an “error” in using public funds to hire his wife.
For Greens lawmaker Noel Mamere, “Penelopegate” is an example of the meticulous investigative work that, together with its caustic tone, has earned the Canard cult status.
“The Canard never puts out a claim that could end a politician's career without checking and double-checking,” said Mamere, adding: “It's the opposite of a social network.”
By the AFP's Laurence Benhamou