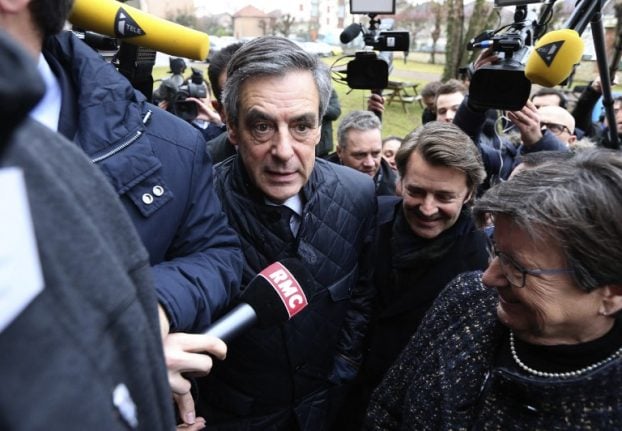 Photo: AFP
Fillon, whose bid for power has been in turmoil since it emerged his British-born spouse Penelope was paid hundreds of thousands of euros for the suspected “fake job”, admitted Monday he had made an “error” as he sought to move on from the scandal.
After saying he “profoundly regretted” employing her, the 62-year-old former prime minister then insisted at Monday's press conference he had done nothing illegal and that he was the target of a “media lynching”.
Fillon was to meet lawmakers from his Republicans party and then attend a campaign event in the northern city of Troyes as he seeks to get his campaign back on track less than three months before the first round of the election on April 23.
An opinion poll however showed that Fillon's explanations had failed to convince two-thirds of voters, and just one in three of those questioned believe he should remain as the conservative candidate.
When just rightwing supporters were quizzed, support for Fillon was far higher with between 58 percent and 62 percent saying they found his version of events credible, according to the Harris Interactive survey of 927 people.
His surprise victory in the rightwing primary in November was built largely around a pledge to slash public spending and cut the jobs of 500,000 civil servants. Le Pen attack
Fillon's woes have benefited his main rivals in the presidential race, far-right leader Marine Le Pen and centrist former banker Emmanuel Macron, who is running under the banner of his own political movement, En Marche (On the Move).
Polls carried out before his explanation show that Fillon, for months the leader of the race, would now be eliminated in the first round on April 23, with Le Pen and Macron moving on to the May 7 runoff.
Le Pen blasted Fillon on Tuesday, saying: “I don't understand anything about what (he) has done and what he says.
“He said he didn't want to put himself through trial by media and then he calls a big press conference to ask forgiveness for something which he explains is perfectly legal and that there is no problem,” she told LCI television.
The leader of the National Front (FN) has her own expenses concerns, with the European Parliament demanding she repay 300,000 euros ($320,000) in allowances that it says she spent paying a Paris-based aide.
Le Pen, who has a seat in the European Parliament, is refusing to meet the demands, saying she did nothing wrong.
'Dirty tricks'
Fillon argued that his wife's average monthly salary of 3,677 euros (around $4,000) was “perfectly justified” and that while she did not have an access badge for the National Assembly building, she had “always” been his assistant over his long political career.
He again presented himself as the victim of a dirty tricks campaign which he claimed was orchestrated by the left to prevent the right regaining power after five years of Socialist rule.
Addressing the claims by the Canard Enchaine newspaper that Penelope did not actually perform the duties for which she was paid, Fillon said: “No one has the right to judge what a parliamentary assistant's job consists of, except the MP himself.”
Republicans lawmaker Jacques-Alain Benisti said Monday he believed Fillon's explanations were sufficient and “the dissenters will now fall in line”.
Mael Pouliquen, an 18-year-old economy student who has campaigned for Fillon before the scandal, said he found the politician “very frank and very clear.”
“He has my support again, for now anyway,” he told AFP.
Some of Fillon's party critics have suggested Alain Juppe, the runner-up in the primary, should take over. Juppe, 71, ruled out such a move on Monday.