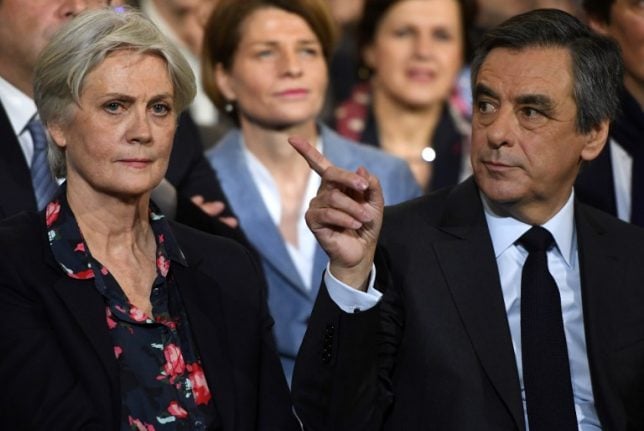 Photo: AFP
Fillon, the candidate for the rightwing Republicans party, has seen his campaign plunged into turmoil by the revelation that his British-born spouse was paid more than €800,000 ($860,000) for a suspected fake job as his assistant.
The scandal deepened last week when one of France's main investigative news programmes, Envoyé Special, broadcast previously unseen footage from a 2007 video interview for the Sunday Telegraph in which Penelope Fillon said she had “never been actually his assistant or anything like that”.
Fillon, who apologised Monday for employing his wife but insisted her salary was “perfectly justified”, said this quote was “taken out of context” and that his wife worked constantly in his constituency managing his mail and meetings.
Fillon also said the British journalist who interviewed Penelope Fillon, Kim Willsher, had contacted his wife to tell her “how shocked she was by the use that had been made of excerpts from this interview”.
That prompted Willsher to tweet in French: “No Mr Fillon! The quotes on Envoyé Special were not taken out of context. The report did not shock me. Please. Stop attributing incorrect statements to me.”
Willsher's tweets were picked up by the French media, but they prompted Fillon to hit back and publish emails from the journalist to his wife with the words “she regrets that they have been published out of context”.

In her first email the journalist does say she is angry that “some elements of the interview have been taken out of context”.

However this email was sent on January 30th before the emergence of the crucial video on February 2nd which contained Penelope's infamous “I've never been his assistant” quote that François Fillon said had been taken out of context.

Willsher appears to be referring to quotes included in her own written article of the interview – which did not include Penelope's claim, that were then taken out of context by French media sites.

Willsher told AFP she had written to Penelope Fillon several days ago to say she was “sorry” for the problems the interview had caused, but she was not “shocked”.

She later added more thoughts in English to explain her version of events.

#Fillon.I wrote to Mrs Fillon saying I was sorry that an interview of 10 yrs ago had come back to bite everyone – including me.(1/3)

#Fillon…there is an interview with Mrs Fillon and a film of that interview. Read the article. Watch the film. I've nothing to add (3/3).

Fillon was the election frontrunner until two weeks ago, but polls now show him possibly crashing out of the first round in April, likely leaving far-right candidate Marine Le Pen and rising star Emmanuel Macron, a centrist, to battle it out in May's runoff vote.