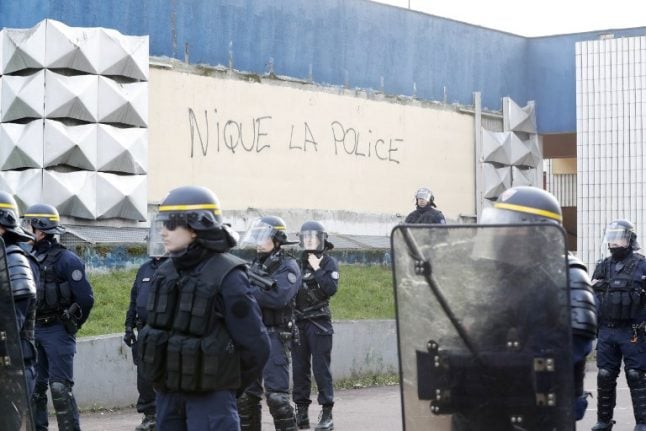 Policemen stand next to graffiti reading "fuck the police" in front of the local police station in Aulnay-sous-Bois. Photo: AFP
One officer was charged Sunday night with rape, while three others were charged with assault over the arrest of a 22-year-old black man on Thursday in Aulnay-sous-Bois, a suburb north of the capital.
The youth worker, named as Theo, suffered severe anal injuries which required surgery. He also suffered injuries to the head and face, leading a doctor to declare him unfit to work for 60 days.
France's definition of “rape” varies from some other western countries, with the penal code stating that it is an assault that includes “any act of sexual penetration” against the victim's will whether using a part of the body or an object.
Interior Minister Bruno Le Roux confirmed late Sunday that all four officers had been suspended during the investigation, adding that exemplary conduct and respect “must guide the behaviour of security forces at all times”.
There were minor clashes and arson attacks on the vast housing estate on Saturday and Sunday evening. At least five people have been arrested, police sources said.
The latest incident comes in the middle of a presidential election campaign and follows the death of a man in police custody in another Parisian suburb which led to violent protests last year.
The death in July of 24-year-old Adama Traore led to nights of violence in Beaumont-sur-Oise against the police, with cars set alight.
A group calling itself Black Lives Matter France, an offshoot of the movement against police brutality in the United States, seized on the case and helped organise protests afterwards.

Policiers accusés de viol à Aulnay : un témoin… par leparisien
Calls for justice
Hundreds of people were marching Monday in Aulnay-sous-Bois to demand justice for the alleged victim, described by family and friends as a youth worker who came from a respected family in the area.
“He was there at the wrong time and came across some crooks,” his brother-in-law Johann told BFM television, explaining the arrest.
His sister Aurelie called for calm as supporters gathered outside her brother's home on Monday holding banners reading “Justice for Theo”.
The local prosecutor's office said the police had stopped a group of around a dozen people “after hearing calls characteristic of lookouts at drug dealing sites”.
During the operation they “attempted to arrest a 22-year-old man.”
When he resisted, they used tear gas, and “one of them used an expandable baton,” the prosecutor's office said, without giving further details.
The Socialist politician in charge of the Seine-Saint-Denis region where Aulnay-sous-Bois is located, Stephane Troussel, said the incident raised “numerous questions”.
“Although thousands of police are doing their work properly… too many arrests end in nightmares for some young people. The image of the Republic is being tarnished. We have to urgently find a solution,” he said in a statement.
In 2005, the death of two teenagers who were electrocuted while hiding from police in an electricity substation sparked weeks of riots. Around 10,000 cars were burned and 6,000 people were arrested.
Police protest attacks
The far-right National Front, which is riding high in the polls ahead of presidential and parliamentary elections from April, jumped to the defence of France's security forces.
Its anti-immigrant leader Marine Le Pen rails frequently against “lawlessness” and promises “zero tolerance” of crime in the rundown suburbs which are home to many newcomers to France.
“If the facts are confirmed, then it's serious and reprehensible,” the party's secretary general, Nicolas Bay, told France 2 television on Monday.
“(But) one shouldn't take advantage to heap criticism on the police who do admirable work in very difficult conditions,” he added.
French police say they are frequently targeted by delinquents in rough areas around Paris and other cities as they play a game of cat-and-mouse with gangs and drug dealers.
They protested in October last year, spontaneously gathering in cities to denounce their ever-increasing workload, bureaucracy, outdated equipment and what is seen as lenient sentencing for violence against officers.
The spark was several petrol bombs thrown at officers in a car in a known troublespot outside Paris on October 8. A 28-year-old officer suffered serious burns and was left in a coma afterwards.
France's definition of “rape” varies from some other western countries, with the penal code stating that it is an assault that includes “any act of sexual penetration” against the victim's will.