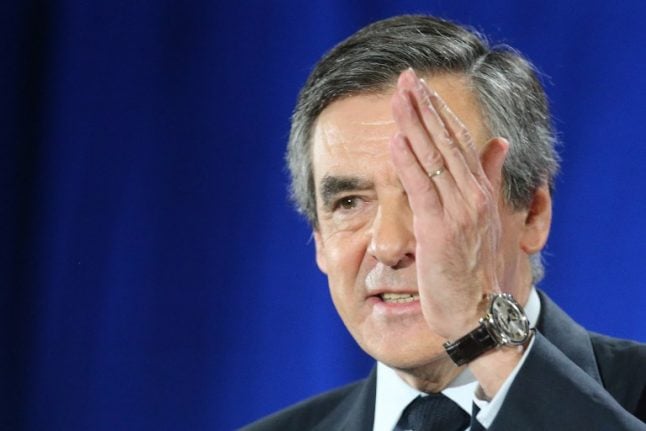 Photo: AFP
“Mr Fillon wants to address the French people,” one of the sources close to Fillon told AFP, without giving any details.
The conservative candidate will speak at his campaign headquarters in Paris at 4pm local time as the scandal around claims his wife earned over €800,000 as a non-existent parliamentary assistant shows no signs of going away.
It is not clear what Fillon will say, but some of aides and allies have been suggesting in the French press that his speech could partly include some kind of mea culpa in which he admits he has made mistakes.
Some reports claim he will also offer to pay back all the public money his wife earned as a parliamentary assistant.
Up to now Fillon's defence has been to rail against the media and those on the left, whom he believes were behind the revelations.
Fillon's presidential bid has been floundering since it emerged that his wife Penelope earned more than €800,000 ($860,000) over a decade as a parliamentary aide to her husband and an ally.
Polls show the former frontrunner would now crash out of the first round of the election in April.
British-born Penelope Fillon is suspected of having been paid without doing any of the normal work of a parliamentary aide. In the past, she has said she was never her husband's assistant.
Fillon also paid two of his children to act as assistants, although new reports in Le Monde on Monday claimed Fillon's son was actually employed to work on former president Nicolas Sarkozy's 2007 campaign team and his daughter helped him write his book.
So not in their capacity as lawyers as Fillon first suggested in a TV interview.
Le Monde newspaper also claim that Fillon is being investigated over whether he helped his friend Marc Ladreit de Lacharrière, the billionaire editor of a literary review, earn the coveted Grand Cross of the Legion of Honor in exchange for his wife getting a job on the publication.
Penelope Fillon was paid €100,000 (€5k a month) to work on the literary review, but there are suspicions that she did little in reality to earn that salary.
All the revelations against him have triggered an investigation into possible misuse of public funds.
Fillon, a devout Catholic who won the nomination of the Republicans party in November on a pledge to slash public spending, has vehemently denied any wrongdoing.
But his listing poll numbers have sown alarm in his camp, leading some members of his party to call for a backup candidate.
Some have suggested former prime minister Alain Juppé, the runner-up in the Republicans primary, should step forward.
But 71-year-old Juppe on Monday again ruled out being a surrogate candidate.
“I've set out my position: it's no, clearly and definitively,” Juppé told reporters in the southwest city of Bordeaux, where he is mayor.