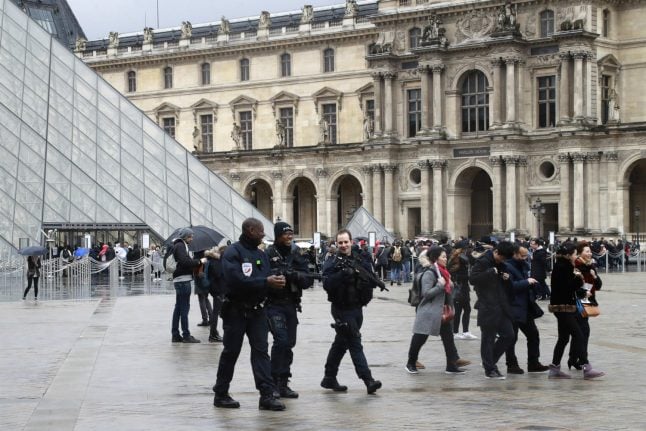 Police officers patrol in front of the Louvre Pyramid in Paris on February 4, 2017. Photo: Jacques Demarthon/AFP
Reda El-Hamahmy, a retired police general, told AFP he had been constantly in touch with his son who worked as a sales manager in Sharjah, in the United Arab Emirates.
“He went on a company trip and when it was over visited the museum. He was supposed to leave on Saturday,” Hamahmy said.
“He is a simple guy. We all love him,” he added, saying he had not detected any signs that his son had been radicalised.
French investigators believe the man who launched a machete attack outside the Louvre in Paris, before being shot and wounded by a soldier, is a 29-year-old Egyptian who entered the country on a tourist visa.
A source close to the case said the man's condition has improved in hospital and it is “no longer life-threatening”.
His father has disputed the police account of how his son came to be shot outside the museum.
“The French government's account is not logical. He was 1.65 metres tall (five foot five) and attacked four guards? And in the end they found nothing in his bags,” he said.
“I can show you pictures where he has no beard,” he said, referring to beards grown by some devout Muslims.
“Our household is a moderate household and mind our own business,” he added.
Hamahmy said he believed the wounded suspect was his son, Abdallah El-Hamahmy, who he said has had no contact with the family since Friday.
“National Security (police) came yesterday and asked for information about him, and I gave them whatever I had,” he said.
Abdallah El-Hamahmy is married, with his pregnant wife currently staying in Saudi Arabia with their seven-month-old son, his father said.
The attacker is believed to have entered France legally on a flight from Dubai on January 26, a French source said.
Investigators are examining a Twitter account of an Egyptian man named Abdallah El-Hamahmy who posted around a dozen messages minutes prior to the attack.
“In the name of Allah… for our brothers in Syria and fighters across the world,” El-Hamahmy wrote, linking to a post he wrote on his Facebook page.
“No negotiations, no compromise, steadfastness and no retreat,” he added.
His Facebook page and his Twitter account have since been suspended.
In another post on Twitter, he cited a Koranic verse that promises heaven to those who are killed fighting for the sake of God.
Another post questioned: “Why are they afraid of the creation of a state for Islam? Because the state of Islam defends its resources and the honour of Muslims.”
He also insulted US President Donald Trump the same day, labelling him “Donald Duck”.
He had announced his trip to France in a Twitter message on January 26. “Travelling to Paris, France from DXB,” he wrote.
A friend of El-Hamahmy said he believed the Twitter account to be that of the suspect, who he insisted had not been an extremist.
“I knew him since he graduated,” he said of Hamahmy, who travelled to the United Arab Emirates after obtaining a law degree from Egypt's Mansoura University.
“I didn't pay attention to his Twitter account, but read it after the incident,” said the friend, who requested anonymity.
“It's as though it's a different person. As though it was hacked.”