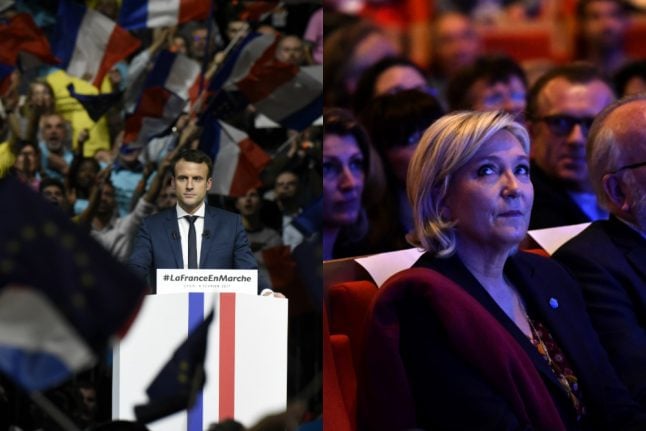 Photos: Emmanuel Macron: Jean-Philippe Ksiazek/AFP; Marine Le Pen: Jeff Pachoud/AFP
National Front Party leader Le Pen published a list of 144 “commitments” on Saturday built around putting France first, reclaiming sovereignty from the European Union, and clamping down on immigration.
She is convinced that Trump and the Brexit vote in Britain point to the return of nationalism, while recent domestic events in France's unpredictable election race could also help her.
Long-time rightwing frontrunner Francois Fillon has been embroiled in an expenses scandal after revelations his wife drew a salary as his parliamentary assistant amid suspicions she never actually worked.
And an incident at the Louvre museum on Friday, where a man with two machetes was shot after attacking a group of soldiers, has also shifted the focus onto Le Pen's preferred subjects of security, Islam and immigration.
“French people on the whole share our vision of the country, the themes which are ours: the patriotism on which our project is built, and then the defence of our civilisation,” she said in the central city of Lyon on Saturday.
She added that France was “undoubtedly at a crossroads where tomorrow we might not recognise our country any more”.
She will address a major rally at 1400 GMT on Sunday in Lyon, a city where she once compared the sight of Muslims praying in the street to the Nazi occupation.
Sources in her party say 4,000-10,000 people are expected. The room was only half full at her event on Saturday.
Despite her confidence and the seemingly favourable international winds, Le Pen is still seen as unlikely to emerge as winner in April and May's two-round election, according to polls.
While the anti-elite career politician is the favourite to win the first round, a mainstream candidate would beat her in the second round when moderate voters are expected to close ranks to keep her out, surveys show.
While the election was long seen as a two-horse race between Le Pen and Fillon, the latter's expenses scandal has further boosted the chances of 39-year-old centrist independent Emmanuel Macron.
“On paper, Macron has the strongest chance of winning,” one of Le Pen's advisors conceded on Saturday, speaking on condition of anonymity.
A former economy minister under unpopular President Francois Hollande, Macron is also running as an outsider from the system and has founded his own party, En Marche (On The Move).
Benefiting from being a fresh face in a familiar field of characters, the pro-European moderate packed out a 8,000-place venue on Saturday and had thousands more queueing outside.
Speaking in the central city of Lyon the day before Le Pen addresses her own supporters, Macron portrayed himself as the only candidate capable of rising above the traditional left-right split in French politics to occupy the centre ground.
“I am not going to say that the left or right is meaningless, that they are the same thing. But are these divisions not a hurdle?” Macron said.
“I want to reconcile the two Frances that have been growing apart for too long,” Macron said.
The presidential candidate said Le Pen “did not speak in the name of the people” and he took aim at nepotism in her National Front party, which was founded by her father, antisemitic former paratrooper Jean-Marie Le Pen.
Marine's niece, the hardline Marion Marechal-Le Pen, is also a senior figure in the party.
Among the key proposals in Le Pen's “commitments” to the nation is a pledge to hold a referendum soon after taking power on whether France should remain in the European Union.
She favours a radically overhauled European Union which would repatriate almost all powers over economic policy, currencies and border control to member states.
She also proposes “zero tolerance” of crime, 15,000 extra police, imposing higher taxes on foreign workers and imports, as well as freeing small firms from red tape.
On economic policy, she wants to lower the retirement age and increase some welfare payments in an agenda designed to appeal to hard-pressed areas suffering from job losses.