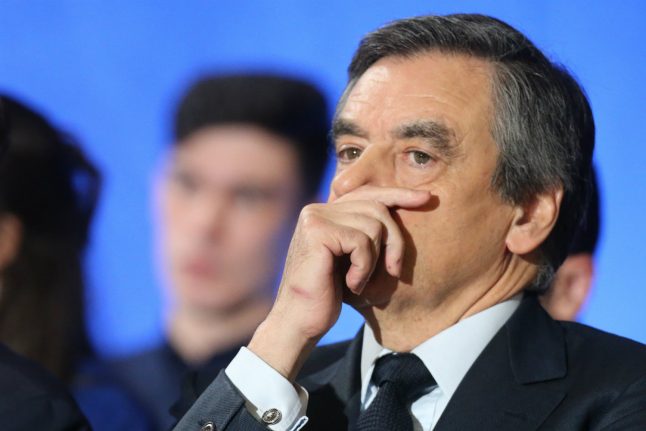 Photo: François Nascimbeni/AFP
France's far-right National Front sharpened the attack on the conservative Fillon following damaging new television revelations.
“I wish Francois Fillon would take responsibility and withdraw from this presidential election… so we can get back to a debate about the real issues,” deputy FN leader Florian Philippot told RTL radio on Friday.
On Thursday, the France 2 channel aired newly discovered footage of Fillon's wife Penelope, who was reportedly paid more than 800,000 euros ($860,000) as a parliamentary aide amid suspicions she never worked.
In the interview filmed in 2007, Penelope can be heard talking about how her children have only ever known her as a mother and saying “I've never been actually his (Fillon's) assistant.”
Penelope Fillon's lawyer, Pierre Cornut Gentille, insisted that her aired remarks had been “taken out of context”.
In a video message on Friday, Francois Fillon fought back against the scandal, saying “I will stand up and face those in the shadows who attempt to damage me.”
“I understand that these accusations are troubling some of you,” he added.
Things got potentially worse for Fillon on Friday as the French Senate announced it would hand investigators documents related to jobs that he gave his children while he was an upper-house lawmaker.
The weekly Le Canard Enchaine newspaper has reported that Fillon obtained jobs as parliamentary aides for his children, as well as his Welsh-born wife Penelope.
Fillon hired Marie and Charles, two of the couple's five children, when he was a French senator from 2005 to 2007, and they earned a total 84,000 euros, the paper said.
Fillon has admitted to employing his family during his time in parliament, which is not illegal in France. He has repeatedly denied any wrongdoing.
The 62-year-old Fillon, candidate for the rightwing Republicans party and formerly the frontrunner ahead of April's first round of the presidential election, is determined to try to ride out the scandal which he has called a “plot” against French democracy.
Marine Le Pen, who leads the anti-establishment and anti-immigration FN, is seeking to benefit from the tarnishing of ex-prime minister Fillon, who previously had a sleaze-free reputation and who takes a hard line on immigration and Islam.
Le Pen would win the first round if it were held today, according to the latest polls, but would lose in the run-off on May 7.
“The bond of trust has been broken,” she said on Wednesday. “It's up to him to draw the conclusions or his political family.”
But Le Pen has her own expenses scandal after she refused this week to meet a deadline to repay nearly 300,000 euros which the European Parliament budget says was incorrectly used to pay a long-time aide. The anti-EU leader is an MEP.
The FN boss is convinced that Donald Trump's victory in the United States and Brexit in Britain mean the time has come for her own anti-elite, anti-immigration and nationalist leadership in France.
One of the beneficiaries of the Fillon scandal could be Emmanuel Macron, the 39-year-old independent centrist who was seen advancing to the second round to face Le Pen in a poll this week.
The surprise winner of the Socialist nomination, the leftwing Benoit Hamon, is also gaining the polls and is eyeing gains from Fillon's troubles.
Fillon's fate will depend on his ability to rally his party's lawmakers behind him amid signs of anxiety ahead of parliamentary elections in June which will follow the presidential vote.
A small minority of lawmakers have already broken ranks and criticised him publicly, but he appears to be retaining support – for now – partly because of the difficulty of drafting in a last-minute replacement.
“We give Francois Fillon our complete support because his commitment to France is vital,” a group of senior Republicans figures wrote in the rightwing Le Figaro daily on Thursday.
Less than 80 days before voting, the most popular candidate among voters to replace Fillon would be Alain Juppe, a 71-year-old ex-prime minister who was resoundingly beaten by Fillon in a primary contest last November.
Juppe has so far ruled himself out.