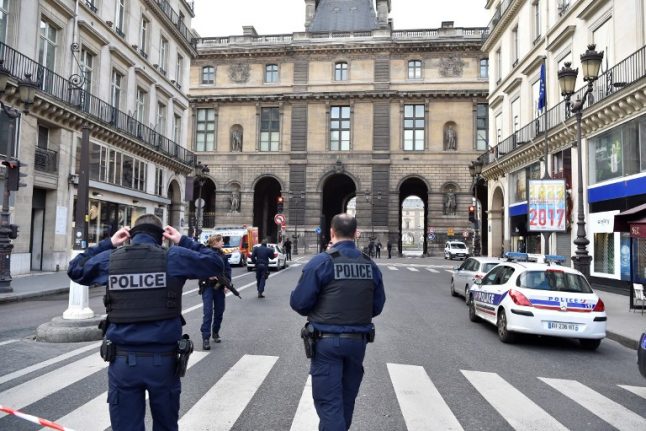 All photos: AFP
What actually happened?
A man was refused access on Friday morning to the underground Carrousel du Louvre shopping centre, which is next to the world famous art gallery.
He then pulled out two machetes and attacked one of the soldiers standing guard at the entrance.
“At first the soldiers tried to fight him off with close contact but were unable to contain him. They then opened fire,” said Colonel Brulon, the spokesman for the operation Sentinelle.
The two photos below appear to show the moment the attacker was neutralized by soldiers. Police quickly evacuated nearby buildings and closed nearby Metro stations. Tourists visiting the nearby Louvre museum were locked into rooms for the safety for about an hour.
The Louvre was closed off for the rest of the day, to be reopened to the public on Saturday. Was anyone hurt?
No one was killed.
The attacker was shot several times in the stomach and sustained serious injuries, police said. He has been taken to hospital.
The soldier who was attacked sustained light injuries to his arm.
No other injuries have been reported. Was it a terror attack?
Prime Minister Bernard Cazeneuve said the attack was “clearly of a terrorist nature”.
Police sources told AFP that the attacker yelled “Allahu Akbar” (“God is greatest” in Arabic) during the attack, a common cry of attackers during Jihadist attacks.
Who was the attacker?
The man's identity remains unknown at this point, the interior ministry said, and he had no ID on him at the time of the attack.
Unconfirmed reports say the man has identified himself as a 29-year-old Egyptian, recently arrived in France, a source told L'Express newspaper.
Police will be also trying to find that out as well as whether he had any links to terror groups. What were the attacker's intentions?

It appears he intended just to attack the soldiers rather than tourists. Police say he entered the Carrousel du Louvre and directly threatened the soldiers.
“I think this was an attack by an individual who obviously intended to cause harm,” Paris police chief Michel Cadot said.
The Isis terror group has made repeated calls for its followers to attack police and soldiers, whom it sees as a legitimate target because they represent the French state.
Here is a link to a list of previous attacks against police and soldiers in France.

Did he have accomplices?

It appeared to be a lone wolf attack at the time but, a second person was arrested several hours later – a woman – although the Interior Ministry has not revealed exactly how or even if she is connected to the incident.
Police raided a building in central Paris after the attack, although the results of the raid remain unknown, reported the AFP.
What next?
France and especially Paris have been on edge ever since terrorists carried out a series of attacks in January 2015.
It wouldn't be surprising to hear of a tightening to the national state of emergency, which has been in place since the Paris attacks of November 2015.
The state of emergency was most recently extended in December – for the fifth time – and will run until July 15th 2017.
Soldiers and armed police have been heavily patrolling tourists sites like the Louvre and the fact they stopped the machete attacker suggests their security operation does work.
However Hector Clark, a tourist caught up in Friday's attack was not that impressed by security at the museum.
“We made a point about the lacks security of the Louvre when we came in so hopefully, for the Louvre's sake, they tighten it in future,” he said.