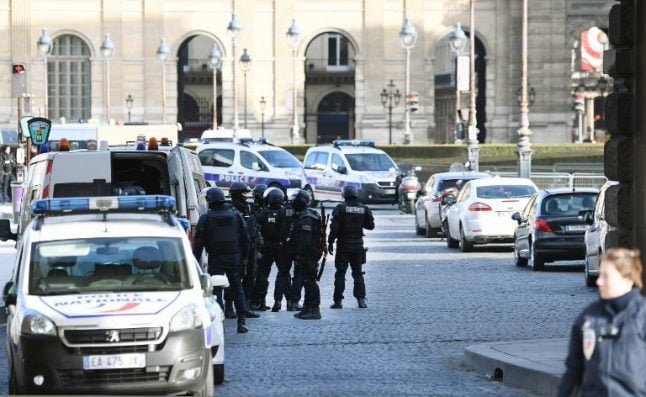 Armed police at the Louvre on Friday morning: AFP

French police raided a building in central Paris on Friday as part of the probe into a thwarted attack by a machete-wielding
man at the Louvre, a source in the inquiry said.

Investigators entered a building near the Champs-Elysees avenue, the source said, after the assault in which the attacker was shot and wounded by a soldier patrolling outside the museum.

Hundreds of tourists were confined to secure areas of the world-famous art gallery in central Paris after the attacker was shot five times around 10:00 (1100 GMT) in a public area inside the complex.

It sparked fresh jitters, but also anger, in a country still reeling from a string of terror attacks over the last two years and under a state of emergency since November 2015.

The economy, immigration and security are major issues for voters ahead of presidential and parliamentary elections which has been forecast to confirm the country's shift right after five years of Socialist rule.

The image below apparently taken by a Chinese Tour guide appears to show the moment after the attacker has been neutralized by the soldiers.

Another image was shown on BFM TV: President François Hollande called it “a savage assault” and reaffirmed the state's determination to fight terrorism.

One soldier was “lightly injured” and has been taken to hospital, while the knifeman is in a serious condition but is still alive, security forces said. He was undergoing an emergency operation at Georges Pompidou hospital.

“I think this was an attack by an individual who obviously intended to cause harm,” Paris police chief Michel Cadot said, saying the fact that the man shouted “Allahu Akbar” suggested a “terrorist nature” to the assault.

Two backpacks carried by the assailant were checked by bomb disposal specialists at the scene and were found not to contain explosives.

On Friday afternoon police raided a central Paris apartment building in an operation linked to the attack. Reports in French media suggested the attacker was a 29-year-old Egyptian man, recently arrived in France, however this has not been confirmed officially.

The incident sparked fresh jitters in a country still reeling from a string of terror attacks over the last two years and under a state of emergency since November 2015.

My friend already safely out of the #Louvre without further incident. One more pic of tourists under lockdown before they were released pic.twitter.com/fdWRHerAUn


Thousands of troops have been deployed to guard the capital, with groups of soldiers with automatic rifles a regular sight inside the Louvre and around its sculpture-filled gardens.

Hector Clark, a Londoner on a four-day trip to Paris, was locked inside the Louvre along with other tourists.
“It was intense and everyone was scared at first because the situation was unclear but people settled down after we heard from the head of security that it was safe,” he told The Local.
“We got evacuated to the top floor, everything was calm and well handled, we have been up here for an hour or so but we are being allowed to leave now
“The situation was stable. We were allowed out in small groups. We were just grateful to leave.”

British tourist Gillian Simms, who was visiting Paris with her daughters, told AFP: “It's so sad and shocking… we can't let them win, it's horrible,”

The huge former royal palace in the heart of the city is home to the Mona Lisa and other renowned works of art but also a shopping area and numerous exhibition spaces.

“The people who were in the museum — there were about 250 of them — were held at a distance and confined in secure areas of the Louvre,” city police chief Michel Cadot told reporters outside.

A second man whose behaviour was “suspicious” has been arrested, Cadot said, without giving further details.

Soldiers and armed police have patrolled tourist attractions and other sensitive areas like shopping centres ever since the Charlie Hebdo and Jewish Kosher store attacks of January 2015.

12:26 – Attacker in a critical condition

The latest reports in the French media say the attacker is in a critical condition and is undergoing an operation. He was hit by at least one of the five bullets fired by the soldier. While the fact the machete attacker was successfully halted in his tracks by the soldiers suggests the government's security operation “Sentinelle”, put in place since the Charlie Hebdo attack is functioning well.

But Hector Clark a tourist from London who was caught up in the panic, was not convinced by security levels at the Louvre museum.

“We made a point about the lack security of the Louvre when we came in so hopefully, for the museum's sake, they tighten it in future,” he told The Local.

The Paris prosecutor has opened an investigation into “attempted assassination linked to terrorist enterprise”.

11:53 – Area around Louvre has been secured, says Mayor Anne Hidago

Anne Hidalgo has been speaking live on French TV who confirmed the area around the Louvre has been secured and visitors to the museum were being evacuated (see video below).

Those inside #louvre shopping centre evacuated after one hour wait inside @France24_en @FRANCE24 @KarimHakiki pic.twitter.com/UounYICyIN

Hector Clark, a Londoner on a four-day trip to Paris, was locked inside the Louvre along with other tourists
“It was intense and everyone was scared at first because the situation was unclear but people settled down after we heard from the head of security that it was safe,” he told The Local.
“We got evacuated to the top floor, everything was calm and well handled, we have been up here for an hour or so but we are being allowed to leave now
“The situation is stable. We are allowed out in small groups.We are now just grateful to leave.”
11:45 – Statement from the Prime Minister and Minister of Interior

PM Bernard Cazeneuve and Interior Minister Bruno Le Roux have issued a joint statement in which they praise “the coolness and professionalism of the soldiers and police officers who were able to immediately neutralize the armed attacker in order to protect all staff and visitors present.”

The ministers “wished a speedy recovery to the wounded soldier and reminded us that the mobilization of all the security forces is to protect our fellow citizens and those who frequent our country.”
11:43 – Police confirm no explosives found in rucksacks worn by attacker

11:30 – This video in French gives a summary of this morning's incident at the Louvre

The Ministry of the Interior have also confirmed a woman was arrested at the scene, but they say it is not clear what role, if any, she had in the attack. The ministry says we have to be “cautious” at this stage about suggesting she was involved.

11:21 – French PM describes it as an attack of a “terrorist nature”

Prime Minister Bernard Cazeneuve said the attack was “clearly of a terrorist nature”. 11:18 – Attacker wounded in stomach and taken to hospital

Latest reports from French police say the attacker was wounded in the stomach rather the legs as first reported. He has been taken to the Georges Pompidou hospital.

11:15 – Tourists locked in rooms at Louvre for safety

we've all been locked inside the louvre there are hundreds of police vans outside pic.twitter.com/KQVPrFSPi3

Police chief Michel Cadot has just held a press conference in which he confirmed the attacker was armed with several machetes and was carrying a rucksack, rather than suitcases as earlier reported.

Cadot said no explosives had been found on the attacker but that he shouted threats as well as “Allahu Akbar” (God is greatest, in Arabic).

Report: Reports say the soldier opened fire on the knifeman after he attacked him at the Louvre Carrousel shopping centre on Friday morning.

BFM TV reported that the man tried to enter the shopping centre with two briefcases. Reports say that when he was refused entry he pulled out two machetes and attacked the soldier as he shouted “Allah Akbar”. The soldier responded by opening fire.

According to reports the attacker was shot in the legs and seriously injured. The soldier was reportedly left with an injury to his arm.

A security cordon has been set up and the underground Louvre Carrousel shopping centre has been evacuated. The latest reports say no explosives were found in the man's two suitcases and the bomb squad was on the scene.

Reports on Twitter said tourists at the museum were being moved into rooms to keep them safe. The Louvre itself has declined to comment on the situation.

French media are reporting that the Louvre has closed until further notice.

Friend sends pic from inside the #Louvre , tourists being evacuated into locked down halls pic.twitter.com/1UxMkBsmPJ

“Something is going down at The #Louvre 30 National Police vehicles with guns drawn,” said one tweeter.

He added:
“The sirens went off and the emergency escape doors lifted from the ground. Four armed guards then sprinted around the grounds outside of the pyramid entrance looking for something.”

In the video, an alarm can be heard in the background. A worried passerby can be heard saying: “I wonder if it's a training exercise”.

Something is going down at The #Louvre 30 National Police vehicles with guns drawn pic.twitter.com/kpLTCtVdZN

France's interior ministry confirmed on Twitter that a serious security operation was underway in the area around the Louvre.

While there is no confirmation yet there incident was linked to terrorism Paris and the rest of France is on high alert after a series of attacks in recent years, notably in Paris in November 2015 and Nice on July 14th last year.

Since the Charlie Hebdo terror attacks of January 2015 French soldiers have been patrolling the streets around sensitive sites such as tourist areas and shopping centres as part of Operation Sentinelle.

There have been a number of attacks against both soldiers and police, who Isis have called on jihadists to specifically target the armed forces and police.