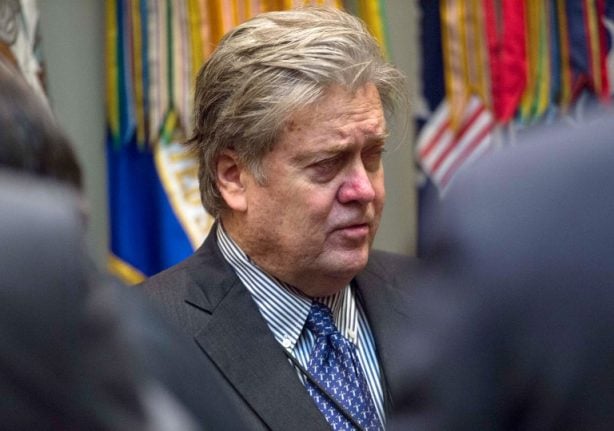 Breitbart's executive chairman Steve Bannon. Photo: AFP
Breitbart – the anti-immigration, anti-EU, anti-establishment US news site that supported Donald Trump – said in November that it planned to launch in France with one job in mind: to help get Marine Le Pen elected president.
But the team may have run into an unexpected obstacle – a French student determined to keep them from France.
The student, named Antonin by The Verge news site, bought the domain names breitbart.fr, breitbartnews.fr, and breitbartnewsnetwork.fr in a bid to block the French launch.
“When I saw that they wanted to launch in France I was really afraid, because I thought it could work really well in France,” the student told The Verge.
“So I immediately went to [French web hosting provider] OVH and saw that the domain name was available.”
He added that he had no intention of selling the domain names – no matter the offer – and had considered redirecting traffic to a non-profit organization.
Breitbart News, whose anti-elite, anti-immigration agenda has made it popular with white supremacists, is credited with helping propel Donald Trump to the White House.
Trump named the executive chairman of the platform, Steve Bannon (pictured above), as his chief strategist soon after the election.
If Breitbart does make it to France, it will be welcomed by the far-right.
Marion Marechal-Le Pen, whose aunt Marine is the leader of the National Front (FN), told AFP in November that she would be happy to cooperate with the site.
“All alternative media are generally positive. Donald Trump is the demonstration of that… they're among the useful tools,” the 26-year-old parliamentarian said.