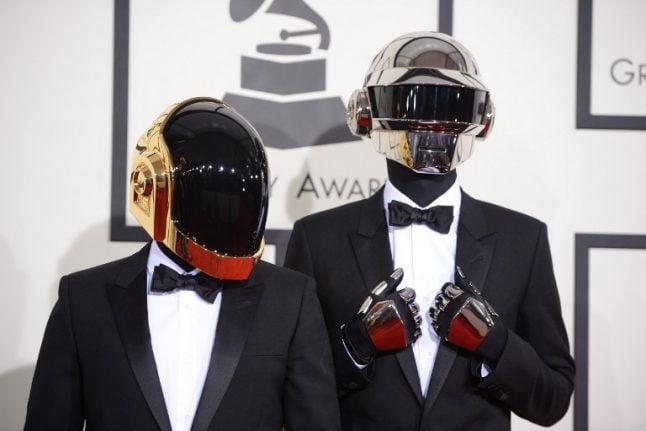 Photo: AFP
The robot-clad DJs will take the stage at the music industry's gala awards in Los Angeles on February 12 to play with R&B sensation The Weeknd, whose latest album featured collaborations with the duo.
Daft Punk, who went from the nascent French house music scene of the 1990s to international fame, has rarely performed since closing a tour in 2007, and members Guy-Manuel de Homem-Christo and Thomas Bangalter never show their faces in public.
Daft Punk's last performance was at the Grammys in 2014, when the duo won the most prestigious awards of Album of the Year and Record of the Year — accepting the prizes silently while in costume.
The Grammy performance is sure to renew speculation of a larger return of Daft Punk, who have been quiet since the worldwide success of the duo's 2013 album “Random Access Memories.”
Daft Punk re-emerged late last year to contribute to two tracks on The Weeknd's chart-topping latest album “Starboy,” including the title track (below).
The Grammy Awards frequently pair nominated artists with high-profile established acts.
The Recording Academy, announcing collaborations for the televised ceremony, said that Anderson Paak — whose innovative blend of hip-hop, soul and jazz has won him a nomination for Best New Artist — would take the stage with alternative rap pioneers A Tribe Called Quest as well as Foo Fighters, fronted by Nirvana rocker Dave Grohl.
Country singer Maren Morris, who is also up for Best New Artist, will perform at the Grammys with pop and R&B star Alicia Keys.
The Recording Academy previously announced acts who will perform on their own including superstar English ballad singer Adele, funk revivalist Bruno Mars and metal legends Metallica.