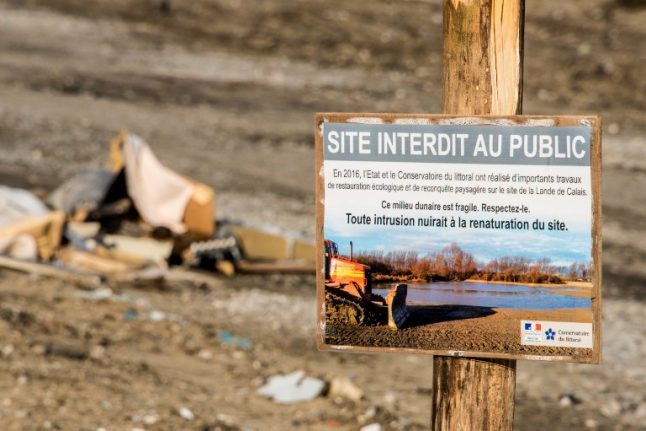 Photo: AFP
In October last year, authorities ordered the closure of the migrant camp known as “The Jungle”, on the outskirts of the northern port town of Calais.
Up to 8,000 migrants were dispersed around France. A number of minors were accepted by the UK.
But local aid groups have reported in recent weeks that the migrants have made a return to Calais – especially minors.

A police source estimates that up to 400 migrants are in Calais, and that 15 more are arriving each day, reported Le Figaro newspaper.
But rather than returning to the Jungle camp which has been fenced off, the new arrivals are spread out around town, some sleeping at the train station, reports say.
Police are kept busy in the area keeping an eye on the migrants, stopping them from entering the site of the Jungle, and stopping volunteers from lending a hand.
Gaël Manzi, a volunteer at refugee aid group Utopia 56, is among those who are discretely trying to help the migrants each night.
“There are many migrants who've been coming back to Calais since the beginning of January, and we're seeing mostly minors,” he told The Local.
He estimated that there were between 60 and 80 minors in the area, and that the older migrants were more likely to keep out of site to avoid being taken away by police.
“The migrants aren't actually at the camp site, they're a bit all over the place, at the railway station, in the city centre,” he said.
Manzi said his team works covertly during the nights – so as to avoid the police – and gives out sleeping bags and food.

Aid groups in the area have been calling for a basic emergency shelter to be set up in the area, particularly given the harsh winter temperatures, but their calls have fallen on deaf ears.
A proposal for a shelter for 20 people – which would be used as a short term solution before moving migrants on elsewhere, won the backing of aid groups and local prefect Jean Aribaud, but it, too, was ignored.
“It was a solid and realistic proposal which was not followed up by the government,” Aribaud told Le Figaro.
Francois Guennoc, vice president of the Auberge des Migrants aid group, added that the government was “in denial about the current situation in Calais.”