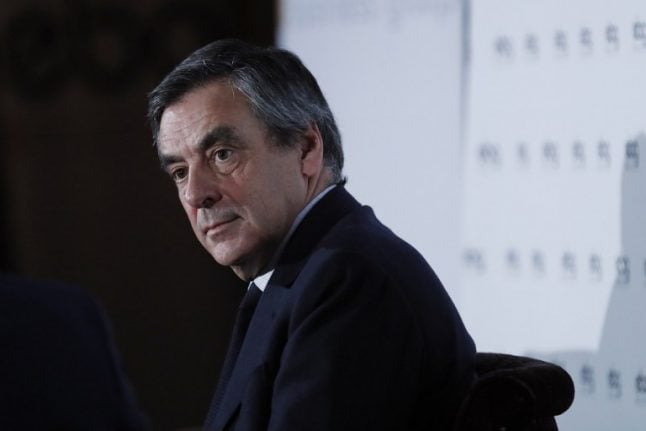 Photo: AFP
Conservative candidate Francois Fillon was on Wednesday fighting fresh claims he gave his family highly-paid fake jobs, a scandal threatening to derail his bid to become French president later this year.
The Canard Enchainé newspaper alleged in its new edition that Fillon obtained jobs as parliamentary aides for his children as well as his wife Penelope, whom the paper has nicknamed “Miss Moneypenny”, jobs that paid a total of around €1 million ($1.1 million).
The fresh claims came as investigators raided parliament and seized documents as part of a preliminary probe into a first set of charges on fake jobs the paper levelled against Fillon last week. Fillon, 62, was the long-time frontrunner in the French presidential race and had been widely forecast to face far-right leader Marine Le Pen in the runoff in May, but the claims have hit his support.
On Wednesday Fillon raged against an “institutional coup d'etat” against him.
“We know where this affair comes from, it comes from the government, it comes from the left,” the conservative Fillon told his supporters in a closed-door meeting, according to those present. He also demanded his party stick by him for 15 days to see out the storm.
But on Wednesday, in a sign of how serious a pickle Fillon is in, the French media began openly speculating who could replace him as presidential candidate for Les Republicains party.
Centre-right newspaper Le Figaro, normally a staunch backer of Fillon, headlined with “Fillon case: the specter of Plan B now hangs over Les Républicains,” suggesting party big wigs were now preparing for the scenario that Fillon is forced to withdraw from the race for the Elysée. He has said himself he would only withdraw if he is effectively charged with the offence of “misuse of public funds”. But a new opinion poll on Wednesday could force his hand.
The poll by Elabe appeared in Les Echos newspaper and suggests for the first time that Fillon would be beaten in the first round of voting by both Marine Le Pen and Emmanuel Macron. (see Tweet below)
Even if he is not charged, Penelope Gate appears to be having a huge impact on his popularity.

On Wednesday Republicains MP Philippe Gosselin admitted that while it was a touchy subject party officials, MPs and supporters were asking questions about plan B.
“I do not know if we are working [on a plan] as such, but it is true that questions arise for a number of colleagues and also from our fellow citizens,” he told LCI radio, albeit adding that he still expected Fillon to be their candidate.
That plan B could involve asking Alain Juppé, whom Fillon defeated in the primary, to stand as the candidate. Or what about former president Nicolas Sarkozy?
L'Express newspaper reported on Wednesday that websites such as Baroin2017.fr, Wauquiez2017.fr and Bertrand2017.fr had been obtained. A sign perhaps that someone was preparing for the case that Fillon's replacement for the Elysée race is either François Baroin, Laurent Wauquiez or Xavier Bertrand?
Another Les Republicains MP Benoist Apparu told L'Opinion: “There is a real and heavy anxiety. But for now the dyke holds.”
But for how long? Another right wing MP Damien Abad said it was vital the party can “turn the page quickly.”
But for now that does not look like happening.
On Wednesday a key witness in the affair, Marc Joulard, a key ally of Fillon, will be interviewed by police. Joulard replaced Fillon as MP in 2002 and continued to employ Penelope on wages that topped €7,000 a month.
So far Joulard has kept his lips closed, refusing to answer the scores of media enquiries.
The Canard Enchainé alleged in its new issue out on Wednesday that it had unearthed proof that Penelope was paid as a parliamentary aide out of public funds available to MPs for an additional seven years.
In another new allegation, the paper said two of the couple's five children, Marie and Charles, had earned €84,000 ($91,000) working as parliamentary assistants.
It said Fillon employed law student Marie in 2005, just weeks after he was elected to the upper house of parliament. Two years later her brother took over.
The Canard Enchainé alleged last week that Welsh-born Penelope earned around €500,000 as a parliamentary aide from 1998 to 2007.
The new claims bring the total sum she allegedly made to more than €830,000. 'Smear campaign'
The paper said it could find no witnesses who could recall her working at parliament. In addition, Le Parisien newspaper reported she did not have an accreditation badge or an email account at the National Assembly.
Fillon responded Tuesday by claiming he was the target of a sophisticated smear campaign.
“Such a large-scale and professional campaign has been mounted just to eliminate a candidate by other means than the democratic route,” he told a business conference.
He said he was “calm” about the allegations “and now I await the end of this investigation”.
Fillon has argued that his wife has “always” worked for him, editing his speeches and meeting people in his constituency.
In addition to the parliamentary job, Penelope worked at a literary review owned by a billionaire friend of her husband's where she allegedly earned another 100,000 euros.
The couple were quizzed separately by anti-corruption investigators on Monday and sources said Fillon's staff voluntarily handed over documents in the raid at parliament.
French lawmakers are entitled to employ family members, but attention has focused on what work was actually done.
The claims are damaging for Fillon, a devout Catholic who was a surprise winner of the rightwing nomination by campaigning on his “clean” record.