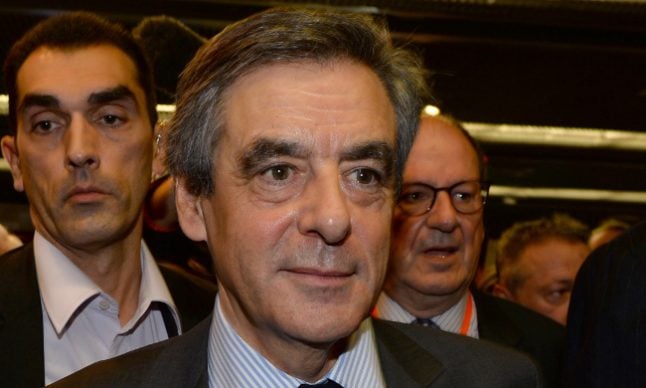 French rightwing candidate Francois Fillon battled to save his scandal-hit presidential bid on Wednesday as disastrous
new polling numbers and party colleagues increased pressure on him to step aside.

After a week of damaging revelations that the 62-year-old former prime minister employed his family members in parliament, a new poll Wednesday showed him crashing out of the election in April.

Fillon has been favourite to be France's next leader since November when he clinched the nomination for the Republicans party, but the survey suggested for the first time he would be defeated in the first round of the election.

The main beneficiary from his woes appears to be Emmanuel Macron, the 39-year-old independent centrist who was seen advancing to the second round in May to face far-right leader Marine Le Pen.

On Wednesday afternoon Fillon defiantly insisted he would not abandon his presidential bid.

afterwards about the severity of the attacks… I will contest them to the end.

Earlier in the day he lashed out at the Socialist government for meddling in his plans to become president.

He pleaded with them to “hold out for two weeks” until a judicial investigation into the allegedly fake parliamentary job of his British-born wife Penelope had been completed.

Fillon has admitted to employing Penelope and two of his children during his time in parliament, with the newspaper Le Canard Enchaine reporting they earned pre-tax income of around 900,000 euros ($970,000).

On Wednesday the newspaper's front page included a joke witness appeal for Fillon's wife, mocking the fact that no one has seen her work at the French parliament.

Anyone who has seen her should present themselves to the Les Republicains party headquarters, the paper wrote. But Penelope is accused of having barely worked for her salary, which reportedly reached 10,000 euros a month in 2007, leading to an investigation into the possible misuse of public funds.

In addition, Penelope worked at a literary review owned by a billionaire friend of her husband's where she allegedly earned another 100,000 euros in 2012 and 2013.

After judicial investigators searched parliament and interviewed Fillon and his wife at length this week, cracks are starting to show in the increasingly anxious Republicans party.

“Fillon's dead. His DNA was probity. Everything's falling apart,” said one MP known to be close to former president Nicolas Sarkozy, whom Fillon defeated in the Republicans primary last year.

His usually loyal supporter Bruno Le Maire admitted publicly that the amount of money involved “is shocking for a lot of French people.”

On Wednesday Republicains MP Philippe Gosselin admitted that while it was a touchy subject party officials, MPs and supporters were asking questions about plan B.
“I do not know if we are working [on a plan] as such, but it is true that questions arise for a number of colleagues and also from our fellow citizens,” he told LCI radio, albeit adding that he still expected Fillon to be their candidate.
That plan B could involve asking Alain Juppé, whom Fillon defeated in the primary, to stand as the candidate. Or what about former president Nicolas Sarkozy?
L'Express newspaper reported on Wednesday that websites such as Baroin2017.fr, Wauquier2017.fr and Bertrand2017.fr had been obtained. A sign perhaps that someone was preparing for the case that Fillon's replacement for the Elysée race is either François Baroin, Laurent Wauquier or Xavier Bertrand?
The former prime minister was mobbed by reporters at a business fair on Wednesday. The claims are especially damaging for Fillon, a devout Catholic who has campaigned on his “clean” record and promise to slash wasteful public spending.

The socially conservative father-of-five has remained defiant throughout, painting the accusations as a plot, “mudslinging” or even an “institutional coup” against him.

For the first time Wednesday he pointed the finger at outgoing Socialist President Francois Hollande, whom he has described as “pathetic” after his five troubled years in power.

The new poll on Wednesday by the Elabe group for the first round in April showed Le Pen would score 26-27 percent, Macron as high as 23 percent and Fillon around 20 percent, a fall of between five and six points since January.

Macron would be expected to beat Le Pen in a second-round runoff to be held in May but analysts caution against making predictions given the turbulence sweeping through the Western world.

Le Pen believes the nationalist sentiment that led to Donald Trump being elected in the United States and Britain voting for Brexit will also carry her to the French presidency in what would be a profound shock for the continent.

But her National Front party is also embroiled in its own expenses scandal over money from the European parliament.

What would happen if Fillon steps aside is still not clear.

The party would have to nominate a new candidate, either by a new primary contest, a vote by party members, or possibly a nomination by the senior leadership.

Supporters of Alain Juppe, the 71-year-old centrist defeated by Fillon in the second round of the Republicans primary, have begun asking him to consider stepping forward to replace Fillon.

Ambitious former president Sarkozy, party chairman until recently, came third in the primary race, but he faces a string of legal cases of his own.

Fillon says that when he was an MP in Paris, his wife carried out constituency work but was based at their 12th-century chateau near Le Mans in northern France.

Penelope has always been a low-key political wife known to prefer life with her children and horses in the countryside than among the Parisian chattering classes.