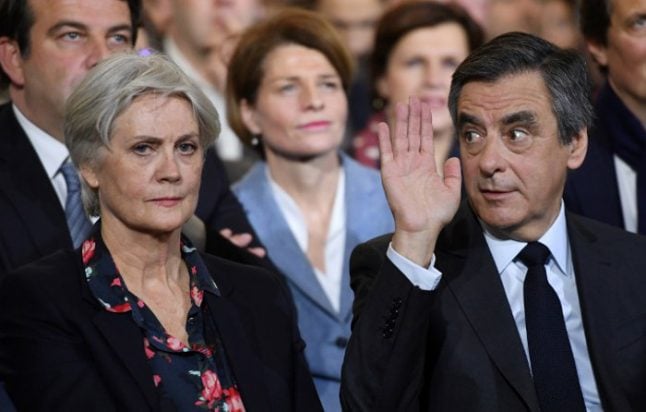 As well as employing his wife Penelope as a parliamentary aide and getting her a job at a literary review owned by a friend, conservative candidate Fillon also employed two of his children as parliamentary assistants, the new report alleged.

The conservative candidate's wife Penelope earned €900,000 – far more than the €500,000 first claimed – as a parliamentary aide and at a literary review owned by his friend, and two of his five children were employed as parliamentary assistants, earning a further €84,000, the report alleged.

The new claims were from the Canard Enchainé newspaper, which broke the original story last week that Penelope Fillon had earned around half a million euros as a parliamentary aide to Fillon and another MP between 1998 and 2007.

The newspaper alleged the job was actually non-existent saying it could find no evidence or witnesses to testify to her work.

Earlier on Tuesday French investigators seized documents in parliament as part of a probe into those allegations.

Sources close to the investigation said, however, that Fillon's staff were voluntarily handing over the documents.

Le Parisien newspaper reported on Tuesday that Mrs Fillon never had a security pass to enter the National Assembly, despite being paid as an assistant for between 1998 and 2007.

Fillon’s lawyer Antonin Levy confirmed to Le Parisien newspaper that Penelope Fillon did not have a badge to enter parliament, but dismissed it as insignificant.

“Many parliamentary assistants who come from the provinces do not have a badge. Penelope Fillon is far from being the only one,” Levy said.

However sources within parliament told Le Parisian that every parliamentary assistant would have a pass.

Fillon's lawyer Levy also admitted she did not have an email address but stressed many other assistants did not either. He also revealed that Fillon's offices in his constituency of Sarthe were in fact at his own house.

The legal woes of Fillon, who had led the presidential race for weeks, is the latest twist in a rollercoaster election that has seen voters hungry for change dump several political heavyweights.

Conservatives were also won over by his promise to slash 500,000 public servant jobs, cut benefits and increase working time.

But he goes into the last three months of the race damaged by allegations that he paid his wife for years for a fake job as his parliamentary aide.

While lawmakers are entitled to employ family members, the Canard Enchaine weekly behind the revelations said it could find no witnesses to Penelope's work.

Fillon has insisted that his wife played a real, if discreet, role and that he is the victim of a dirty tricks campaign.

The couple were quizzed separately by investigators for several hours on Monday. They were also questioned over money received by Penelope for work at a literary review.

On Monday, the Republicans group in the French parliament expressed “unanimous support” for their candidate.

“He has the unanimous support of the lawmakers,” the leader of the Republicans in the lower house, Christian Jacob, said.

The election race is tightening as the April 23 first round approaches, with former economy minister Emmanuel Macron and Marine Le Pen of the anti-immigration and anti-EU National Front both scoring highly in polls.