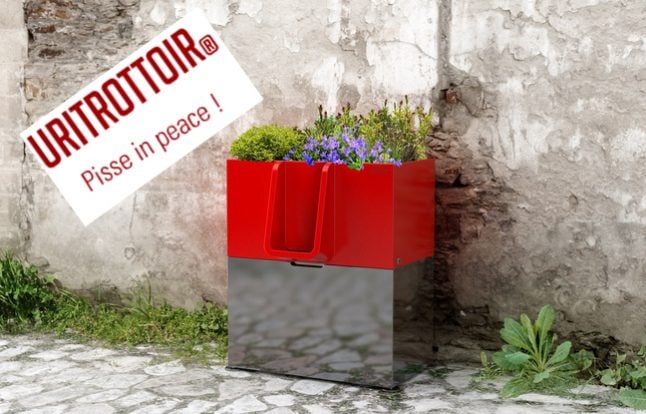 There will only be two urinals to begin with but if the plan works then train stations around Paris and the whole country could soon be home to new eco-friendly urinals, known as “Uritrottoir” (a blend of the verb uriner and the French word for pavement)

The urinals (see photo) feature the usual basin for weeing into but also a pot of flowers to give a more pleasant look than the usual grey, overflowing street urinals that dot the Paris' black spots for street peeing (known as “pipi sauvage” in French).

According to the creators it allows the needy to “Pisse in Peace.”

“People urinating on the streets of France is a serious problem,” inventor Victor Massip from the creators Faltazi told The Local.
“And we knew there was a big demand for a solution, so we've come up with one.
“People are laughing, many of them are amazed, but most agree that it's a good idea to test out,” he added.
READ ALSO: Is this the eco-friendly solution for the wild-peeing plague in Paris? The pair of urinals will be placed at the busy Gare de Lyon in the south east of Paris.

It works by storing the urine on a bed of dry material such as wood chips, straw, or saw dust. This material is later taken away to be turned into compost.

The box is coated with an anti-graffiti paint, and the carbon-rich straw not only makes for great compost, but also means the toilet will be largely odour-free.

If they help tame Paris’s legion of wild street pee-ers then French rail chiefs SNCF will roll them out to other stations in the capital.

Anyone who regularly has to walk through the puddles of pee outside Gare du Nord will have their legs crossed in hope.

READ ALSO: Could street urinals for women work in Paris?