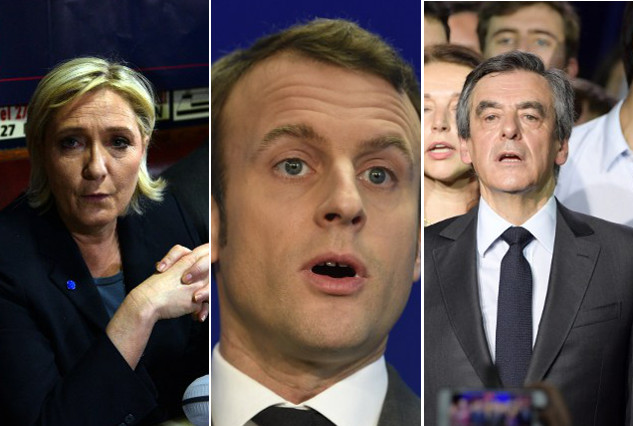 With Hamon’s victory in Sunday’s Socialist primary runoff vote, the list of the main runners for the French presidential race is complete.

With Hamon, who has been labelled the French Jeremy Corbyn (the leftist leader of Britain’s Labour party), now in the running there will be ripple effects on the race.

While Hamon, who wooed Socialist voters with his idea to introduce the universal basic income and tax robots, can rightfully celebrate his victory over ex-Prime Minister Manuel Valls, the big winner of Sunday’s primary may be another former member of François Hollande’s government.

Emmanuel Macron, the ex-economy minister, who quit the government to launch his own presidential campaign, will have a spring in his step after Sunday’s result.

Macron has been drawing huge crowds to his meetings and a poll on Sunday put him almost neck and neck with François Fillon for the first round vote (22% for Fillon to Macron's 21%), albeit both behind Marine Le Pen (25%).

With tough-talking Valls, who is to the right of the Socialist party with his pro-business policies, combative stance on Islam and desire to modernise his party, now out of the race, Macron will find there is now more room to flex his muscles.

Valls’ defeat, which follows that of centrist Alain Juppé in the right-wing primary, means the pro-Europe progressive and English speaking Macron, who has refused to run on a ticket that is either left or right, can occupy the centre ground.

Centrist Francois Bayrou might have something to say about that, but he lags far behind in the polls and has not announced if he will even stand for election.

Macron’s job is to convince those who voted for Valls and Juppé to shift their support towards him.

One weakness of Macron is that he lacks the support of a political party, however some Socialist party bigwigs have made suggestions in recent week they are ready to get behind him. Hamon's victory may be enough for them to jump ship. So if Macron is the big winner who is the big loser of Hamon’s victory?

Normally in a party primary the winner can expect the loser to fall in behind and lend their support and voters, but the battle between Valls and Hamon was seen as an “irreconcilable” split in the Socialist party between the traditional and reformist left.

But Manuel Valls has already said he will refuse to support Hamon’s programme, albeit he suggested on after his defeat on Sunday that he might rethink that stance.

“Hamon is now the candidate of our political family,” Valls said.

But what about those who backed Valls?

“If Benoit Hamon wins the primary it's the equivalent of Jeremy Corbyn conquering Labour. The reformist left will refuse to follow him,” one French MP told Le Monde before Sunday’s result was announced.

One Valls supporter told BFMTV on Sunday he would be tempted to vote for Macron and dismissed the idea of voting for Benoit Hamon, who quit Valls' government because he could not abide by the pro-business shift in policy.

Opinion polls suggest Hamon will be easily beaten in the first round of the presidential election on April 23rd.

Although his radical reformist ideas, such as legalizing cannabis and introducing the possibility of a 32-hour work week, may have helped him to a victory in the primary, it seems he will have difficulty convincing enough French people that he is the man France needs right now.

One of his big problems is Jean-Luc Melenchon, the far-left firebrand who is also in the running.

Melenchon has a hardcore support on the left who are unlikely to jump ship to Hamon in the first round of voting. Essentially the two occupy similar if not the same terrain, with the result being neither will win enough votes to make the second round against the favourite to top the first round Marine Le Pen.

Hamon's only hope appears to be if he can somehow persuade Melenchon and French green party candidate Yannick Jabot to ditch their own campaigns and throw their support behind the Socialist.

It's a long shot.

And what about Le Pen?

It’s unlikely that Hamon’s victory will have too much of an impact on the share of the vote Le Pen will get in the first round of the presidential election.

The voters in France’s industrial north or poorer rural areas who used to vote for the Communist party or the Socialists are unlikely to be won back by Hamon and his ideas.

They appear to be firmly in Le Pen’s camp now after being convinced by her claims that she is the real defender of French workers.

The centre-right candidate Fillon will no doubt be boosted by Hamon’s victory at a time when he really needs some good news.

Fillon has spent the last few days angrily fighting off claims his British wife Penelope, earned €500,000 for a “fake job” as a parliamentary assistant.

The MP for Les Republicains gave a defiant speech to thousands of supporters in Paris on Sunday, in which apart from defending his wife he launched a stinging attack on the left. While his popularity has dropped he is still just about the favourite to be the next president of France.

I refuse to believe the future of France is the universal basic income,” he said in reference to Hamon’s flagship policy idea.

Fillon will see the Brittany born Hamon as the perfect Socialist rival for which to defend his own radical plan to reform France against Hamon's “surrealist” vision.

While Hamon favours a 32-hour work week and universal basic income Fillon wants his own sweeping changes that has led to him being dubbed the French Margaret Thatcher.

He wants an end to the 35-hour week and will raise the retirement age from 62 to 65, plus carry out severe cuts in public spending which include shedding 500,000 civil servant positions.

But while Fillon – presuming he survives the Penelope Gate scandal – may find plenty of ammunition to attack Hamon he would be wise not to get distracted given his real rivals look like being Macron and Le Pen.

While predicting elections these days is proving a fraught exercise, we do at least know the name of the next French president will end in the letter “n”.

Hamon, Macron, Le Pen, Melenchon, Fillon. It's not much but it's something to go on for now.