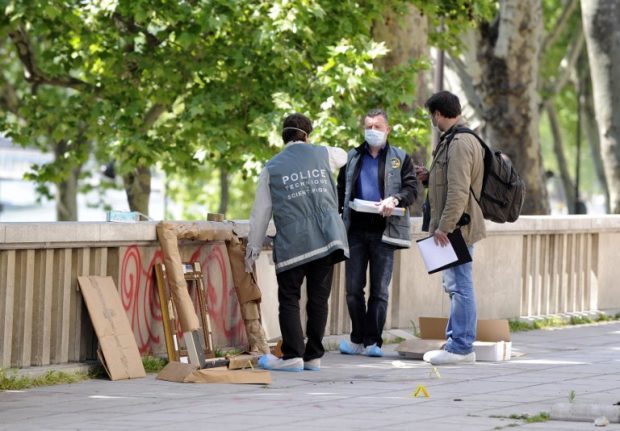 Policemen stand by painting frames outside the Paris' Musee d'Art Moderne. Photo: AFP
Vjeran Tomic, 49, who is facing 14 charges, will stand trial along with two accomplices charged with handling stolen goods.
The three were charged over the May 2010 robbery at the Modern Art Museum of five paintings by Henri Matisse, Pablo Picasso, Georges Braque, Ferdinand Leger and Amedeo Modigliani.
On May 19, 2010, a thief cut through a padlocked gate and broke a window to get into the gallery, one of the most-visited museums in Paris on the leafy banks of the Seine, in the shadow of the Eiffel Tower.
The museum's alarms had been awaiting repair for several weeks and the thief somehow managed to knock out a security camera.
Three guards were on duty that night, but the paintings were only found to be missing from their frames just as the museum prepared to open to the public the next day.
When police arrested the Serb in May 2011, Tomic told them he had initially broken into the museum for Leger's “Still Life with Candlestick” from 1922, not thinking he would also be able to steal another four.
Besides the Leger canvas, the other works stolen were Picasso's cubist “Dove with Green Peas” from 1912 — worth an estimated €25 million ($26.8 million) alone — French contemporary Matisse's “Pastoral” from 1905, Braque's “Olive Tree near Estaque” from 1906, and Modigliani's “Woman with a Fan” from 1919.
All but the Modigliani were hung in the same room in the museum, located in the well-heeled 16th district of Paris, which is run by the city and is home to more than 8,000 works of 20th-century art.
Tomic said he took them all because he “liked” the paintings.
Authorities put the total value of the haul at €100 million ($107 million), but some experts said they were worth twice that, while admitting it would be totally impossible to sell them on the open market.
French police arrested Tomic after receiving an anonymous tip. Surveillance cameras from the night of the heist recorded only one person entering through a window but the person could not be identified.
Where are paintings?
Tomic, an athletic 1.90 metre (6 foot 2) rock climbing enthusiast, earned his nickname for clambering into posh Parisian apartments and museums alike, to steal valuable gems and works of art.
Authorities said he was spotted by a homeless man as he roamed around the museum in the days leading to the theft.
And they say Tomic's mobile phone or that of one of his accomplices showed a signal coming from that area during the heist.
They trailed the signal to a Paris metro station then to a car park in the city centre. Authorities believe that is where he may have sold the paintings to a first dealer.
A second dealer claimed he held on to the paintings for a short time before he dumped them in a garbage can, which authorities do not believe.
International police body Interpol put out an alert to its 188 member countries in the hope of recovering the five paintings, but so far they all remain missing.
There has been a spate of art thefts in Europe in recent years.
The most recent, in 2015, involved the theft of five paintings worth €25 million by renowned British artist Francis Bacon in Madrid.
Spanish police arrested seven people last year suspected of being involved in the theft.