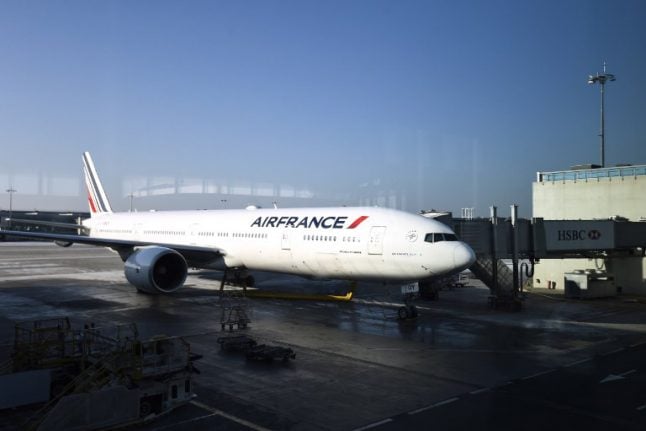 Photo: AFP
US President Donald Trump on Friday signed an executive order banning citizens from Iran, Iraq, Libya, Somalia, Syria, Sudan and Yemen from entering the United States for 90 days.
At first even those legally allowed to stay in the US were blocked from entering until US officials back-peddled.
The ban has impacted countries all over the world, including France.
And over the weekend Air France refused to let 15 people from these countries board US-bound flights.
One of the passengers was leaving from Paris, the others were just on transit through the French capital.
“Like all airlines, Air France is required to comply with the requirements for entry into all the countries it serves and is therefore not allowed to carry passengers knowingly on its flights to countries they are not allowed to enter,” the company explained in a statement sent to The Local.
“In doing so, Air France is simply complying with the international rules governing air transport, which it is obliged to respect.”
“In this way, Air France was obliged to offload 15 passengers from the countries listed in the decree on flights to the United States.”
The airline has said it will contact future passengers by SMS or email to let them know of the travel bans.
While the British Foreign Ministry has received assurances its citizens with dual nationality, meaning holders of a British passport as well as a passport from one of the seven countries on the black list, will not be blocked from travel, it's not clear if France has received the same pledge.
The Ministry of Foreign Affairs told The Local that a statement would be made later in the morning.
Trump's order, named “Protecting the Nation from Foreign Terrorist Entry into the United States”, has turned heads around the world since it was enforced on Friday.
French Foreign Minister Jean-Marc Ayrault said: “Welcoming refugees who are fleeing war is part of our duty.”
“We must… ensure that this happens in a fair, just way and with solidarity … This decision can only cause us concern.”
French President Francois Hollande on Saturday warned his new US counterpart Donald Trump against adopting a protectionist stance and called on him to respect the principle of accepting refugees.
During a telephone conversation between the two leaders Hollande stressed the “economic and political consequences of a protectionist approach”,  the Elysee Palace said in a statement.
“Faced with an unstable and uncertain world, withdrawal into oneself is a dead-end response,” Hollande was quoted as saying.