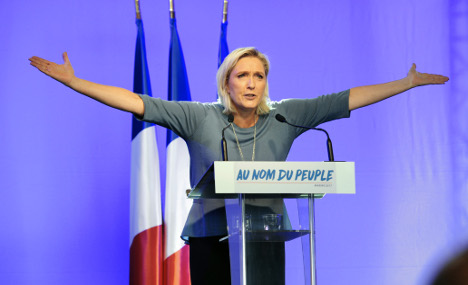 National Front mayor Steeve Briois, who is a leading member of Le Pen’s campaign team was asked whether his party would consider imposing the same ban that has barred citizens of seven Muslim countries from travelling to the US.

“Why not,” he said. “We not living in the word of Care Bears anymore. We are in a horrible world,” he told AFP.

“So from time to time we must take authoritarian measures, even if they shock,” said the mayor of the northern town of Henin-Beaumont.

“It is true that the United States is also a target for jihadists, so if Trump wants to protect it by forbidding the arrival of these people from these countries, he is free to do that.

“Obviously it is unfortunate for those who have nothing to do with that,” he added.

Marine Le Pen has so far not commented on whether she would consider a similar ban, but she did defend Trump at the weekend, saying the only reason people were so angry was because he was sticking to his promises.

She has been keen to avoid any kind of controversy around Islam and recently insisted that the religion has its place in the French Republic. She has however vowed to fight Islamist fundamentalism.

Trump had promised at one point in his campaign to bar all Muslims from entering the country.

Trump’s decree has sparked uproar throughout the United States and around the globe.

It has been condemned by France, where the foreign affairs ministry was on Monday forced to urge French citizens with dual nationality from one of the blacklisted countries to forget about travelling to the US.

Trump has insisted the measure was not a “Muslim ban” saying it was about fighting terrorism and had nothing to do with religion.

He has suggested in the past that the US might have to restrict immigration from France because it had been “compromised by terrorism”.