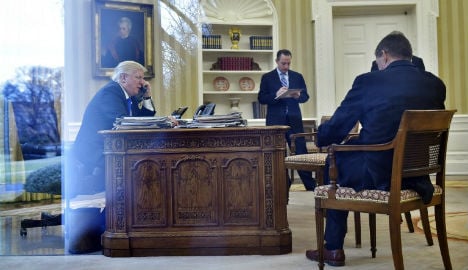 President Donald Trump rings international leaders on Saturday. Photo: AFP
During a telephone conversation between the two leaders Hollande stressed the “economic and political consequences of a protectionist approach”,  the Elysée Palace said in a statement.
Trump on Friday signed an executive order suspending the US refugee resettlement programme for 120 days.
“Faced with an unstable and uncertain world, withdrawal into oneself is a dead-end response,” Hollande was quoted as saying.
He added that defending democratic principles required compliance with “the principles on which it is founded, in particular the acceptance of refugees”.
In addition to his freeze on refugee settlement Trump has also announced that visa applications from seven Muslim countries — Iraq, Syria, Iran, Sudan, Libya, Somalia and Yemen – are on hold for at least 90 days.
Hollande also insisted on “the importance for the planet of the implementation of the Paris convention on global warming”.
Trump has announced plans to undo climate policies and promote domestic energy development as part of his “America First” agenda.
The two leaders also discussed relations with Russia, with Hollande stressing “his wish to pursue and intensify dialogue on all subjects,” while adding that the Western sanctions in place against Moscow over the situation in Ukraine should not be lifted.
Hollande and Trump “agreed to continue with their discussions on essential issues,” according to the Elysee.
At a gathering of southern European Union leaders in Lisbon Saturday Hollande urged Europe to form a united front and provide a “firm” response to Trump.