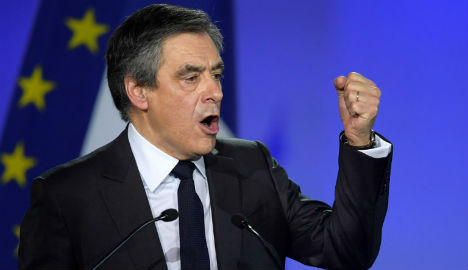 Francois Fillon delivering his fiery speech at the campaign rally on Sunday. Photo: Christophe Archambault/AFP
“We French presidential hopeful Francois Fillon on Sunday hit back at allegations he paid his wife 500,000 euros ($540,000) for a suspected fake job, telling a packed rally his critics should “leave my wife
out” of the election.
“If someone wants to attack me they should attack me straight on, but leave my wife out of this political debate,” Fillon, a conservative who has been leading the presidential race so far, told thousands of cheering supporters, watched by his Welsh-born wife Penelope.
“I want to tell Penelope that I love her and that I will never forgive those who tried to throw us to the wolves,” he told the crowd, to chants of “Penelope, Penelope!”
Fillon has been scrambling to contain the damage to his campaign caused by allegations that his wife collected half a million euros ($534,000) as his parliamentary aide and then that of his successor over a period of eight years — for little to no work.
Investigators have launched a preliminary probe into misuse of public funds.    They are also looking into payments she received from a magazine owned by a friend of Fillon.
Fillon has called the revelations in Le Canard Enchaine investigative weekly a “plot” and says his wife's job was real.
“They're trying to take me down, through Penelope,” he told the crowd of mostly older, white supporters in a Paris hall, who interrupted his speech periodically with shouts of “Fillon, President!”
“It's more than me as a person that is in the crosshairs, it's a higher idea of France that they want to take down mid-flight,” he shouted to cheers of supporters.
Fillon won the conservative Republicans' nomination last November with promises to slash public spending and restore morality in politics.
On Sunday, he was hit by fresh allegations, with Mediapart website and the Journal du Dimanche newspaper claiming he had also paid himself from public funds intended for assistants in the French upper house.
An Odoxa poll on Friday showed his approval ratings falling four points to 38 percent since the scandal broke.
Retired teacher Gerard Perrolier, 72, said he had come to show his support but that “it's true that there's a doubt, but it's up to the justice system to rule”.
“I believe in the ideas that he proposes, but if it's proved that he enriched himself I hope that another candidate from the Republicans will carry the flame,” he told AFP.
Fillon says his wife has always worked for him during his four-decade political career, carrying out tasks including speech editing and representing him at events.
The new allegations published by Mediapart and the Journal du Dimanche this weekend relate to funds made available for senators that have allegedly been widely misused by others.
Since November 2013, two French judges have been investigating illicit payments made by senators to themselves from funds meant for hiring assistants.    Mediapart said the lawmakers usually made out cheques to themselves of around 4,000 euros every quarter — relatively small sums that, over more than a decade, totalled millions.
Six people have been charged, including Fillon's party colleagues Jean-Claude Carle and Henri de Raincourt.
The investigation covers the period after 2009. Fillon left the senate in 2007.