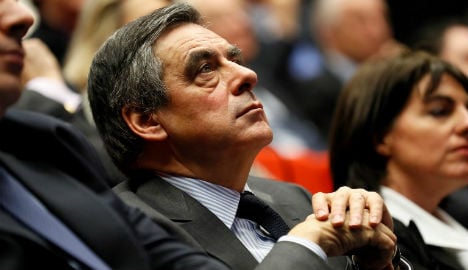 The campaign of Fillon, a former prime minister who won the conservative Republicans' nomination last year, has been dealt a serious blow by claims his Welsh-born spouse Penelope did nothing to earn half a million euros ($534,000) paid from public funds over eight years.
He has insisted that his wife has always worked for him during his four-decade political career, carrying out tasks including speech editing and representing him at events.
“How can we not consider that there are forces at work to silence me and to weaken my candidacy, or even try to prevent me from appearing?” said Fillon in an interview with the Journal du Dimanche newspaper.
“It is a terrible plot, but I am sure that the justice system will not allow itself to be exploited by these defamatory allegations,” added Fillon.
“I will not let myself be defeated … We do not have the right to allow democracy to be spoiled by this behind-the-scenes manoeuvring, which is why I will fight with all my strength and to the end,” he said.
French authorities this week opened a preliminary inquiry into the allegations, which were first made by satirical weekly Le Canard Enchaine, and are also looking into payments Penelope Fillon received from a magazine owned by a friend of Fillon.
Francois Fillon told the newspaper that he would only “answer to justice” and would “not submit to a trial by media”, adding that he had already handed over wage slips to investigators.
“The amount (allegedly) paid is false”, he said, adding that Le Canard Enchaine had confused “gross and net” income.  The newspaper alleged that Penelope received the money between 1998 and 2012.
It also said that in 2012 and 2013, Penelope Fillon was paid 5,000 euros a month at La Revue des Deux Mondes magazine, owned by a friend of Francois Fillon.