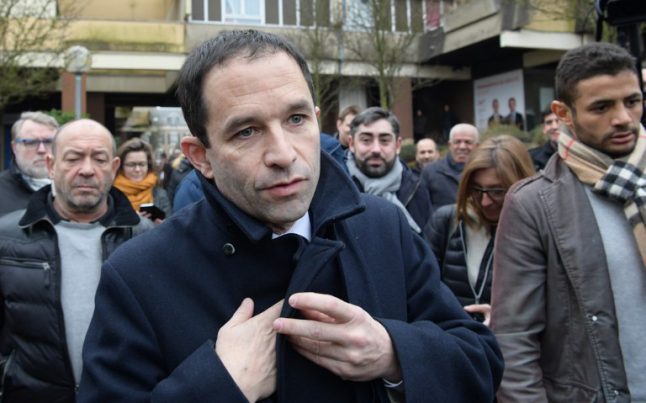 Benoit Hamon, who clinched the presidential nomination for the French Socialist party on Sunday, believes his bold economic and environmental ideas can revitalise the left — without scaring off voters.

The 49-year-old, whose signature proposal is the introduction of a universal basic income, easily beat centrist ex-prime minister Manuel Valls in a primary run-off.

“Tonight the French left is holding its head high, is turning to the future and wants to win,” Hamon said.

The former education minister was seen as an outsider three weeks ago but he dominated the Socialist race with his proposal for a universal income to offset growing automation and robotics, which are making jobs scarcer.

Hamon proposes paying everyone a basic income, beginning with the young and the jobless poor, that would eventually reach 750 euros.

Hamon's ally on the Socialists' left flank, former economy minister Arnaud Montebourg, said the scheme would hoover up France's entire budget, while others argued that it would encourage idleness.

Valls labelled Hamon a dreamer and said his success would doom the Socialists to certain defeat in the two-round presidential election in April and May, already seen as a three-way race between the right, far-right and centre.

But grassroots Socialists were won over by Hamon's proposals for greater protection for the environment and human health, as well as new thinking about the changing role and forms of work.

“He is thinking about the future 15 years from here and the questions that we need to ask ourselves now,” chef Loic Lobet told AFP while casting his vote in the primary on Sunday.

He said Sunday after wining the nomination that France needed a “new economic model” that was not based on the narrow objective of increasing gross domestic product (GDP).

His campaign, which has the slogan “Make France's heart beat”, includes a pledge to build a second aircraft carrier, but he has ruled out increases in income taxes.

Hailing from western Brittany, the blue-eyed, fast-talking father-of-two is the son of a secretary mother and dockworker father who moved the family to Senegal for several years while Hamon was a child.

In 1986, aged 18, he joined student protests against proposed reforms that would have raised tuition fees.

His role in the student movement led to his becoming president of the Movement of Young Socialists from 1993 to 1995.

Footage of him giving a television interview around this time, looking dashing with cropped hair and a bright red jacket, was widely shared on social media in the run-up to the primary.

He went on to work for Martine Aubry, the champion of France's 35-hour working week, becoming Aubry's spokesman when she became Socialist Party leader in 2008.

“People who have worked with him have a tendency to underestimate him,” Hamon's long-standing friend and spokesman Regis Juanico told AFP.

Socialist Party boss Jean-Christophe Cambadelis had hinted in mod-November at Hamon's ability to spring a surprise when he tipped “little Ben” as a possible winner.

The duel between Hamon and Valls was cast as a fight for the future of the deeply split Socialist party, with Hamon embodying its traditionalist left flank against Valls' reformist centre-left faction.

Political scientist Philippe Braud told AFP that many Socialist voters had voted in line with their convictions rather than for which Socialist might have a slim chance of becoming president.

“You want to go down with the sinking ship rather than lower the flag,” he said.