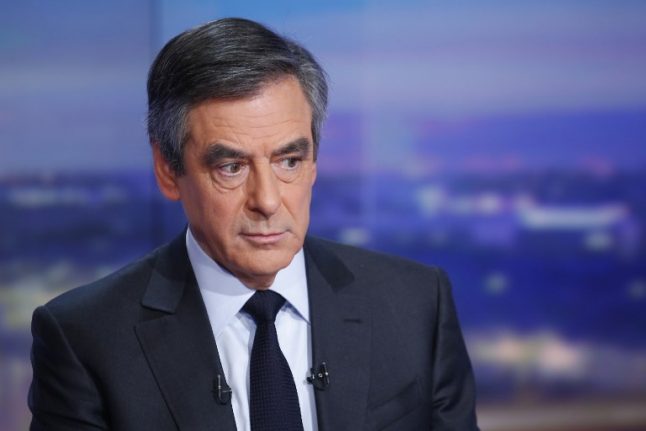 Photo: AFP
Fillon, a conservative who is currently the presidential frontrunner in opinion polls, said British-born Penelope Fillon had been his parliamentary assistant doing tasks such as correcting his speeches and attending demonstrations.
“There is not the slightest doubt that my wife has worked as a parliamentary assistant for me for years,” he said in an interview with TF1 television.
“My wife has always worked for me, she has always been by my side in my public life,” Fillon said.
Pressed on what work she did, he added: “She corrected my speeches, she received a huge number of people whom I couldn't see, she represented me at demonstrations, she did press reviews for me and she passed on people's requests.”
The national financial prosecutor has opened an investigation into the allegations, which were made this week by the Canard Enchaine newspaper.
Fillon's lawyer on Thursday submitted documents to investigators to support his case.
The Canard Enchaine claims Penelope received the money from public funds available to her husband as an MP between 1998 and 2012, but said it could find no-one who recalled her working in the parliament building.
Attention has focused on a quote she gave to a newspaper last year in which she said: “Until now, I have never got involved in my husband's political life.”
Fillon told TF1 she meant she had never “been in frontline politics”.
Polls currently show Fillon, a former prime minister who has campaigned as a “clean” candidate unsullied by the legal woes of some of his rightwing rivals, will face far-right candidate Marine Le Pen in the election runoff in May, although centrist Emmanuel Macron is increasingly in contention.
With the allegations dominating coverage of the campaign, Fillon's lawyer Antonin Levy met with investigators and handed over several documents.
“I had a meeting with (investigating) magistrates from the national financial prosecutor and gave them the documents,” Levy said. “We agreed to talk again as often as is necessary.”
Fillon's campaign manager, senator Bruno Retailleau, predicted that the scandal would be short-lived, saying: “This thing is going to fizzle out very quickly.”
'Clean' candidate
Fillon's rivals in the presidential campaign are likely to use the claims against the 62-year-old, who was the surprise winner of the rightwing primary last year.
In the early debates of the campaign, he contrasted his record with that of former president Nicolas Sarkozy, who is embroiled in several legal cases, saying: “It's hard to imagine General de Gaulle being prosecuted.”
Hiring family members is not against French parliamentary rules if the person is genuinely employed, but attention has focused on precisely what work Penelope carried out for a salary of sometimes around 7,000 euros a month.
The Canard Enchaine said she had also worked for a periodical, Revue des Deux Mondes, owned by a friend of Francois Fillon, between May 2012 and December 2013 and had been paid from public funds.
The silver-haired mother-of-five has kept a low profile in Fillon's nearly four-decade political career.
The couple, who met in their early twenties when she was studying in France, live in a chateau near Le Mans in the northwest.