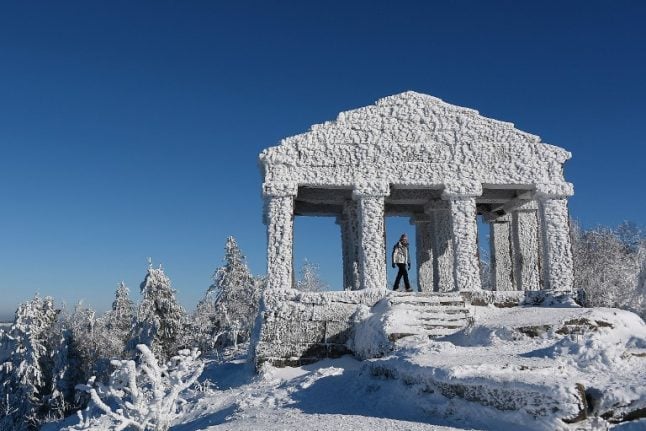 Grandfontaine, eastern France. Photo: AFP
National weather agency Météo France placed three departments on orange alert on Thursday morning, the second highest warning level, which urges the public to be vigilant.
The departments are Ardèche, Drôme, and Vaucluse, all in south-eastern France, and all on alert for snow and black ice on the road. The warnings are in place until 9pm on Friday.
The vast majority of central and eastern France has been put on yellow alert as temperatures plummet again, with the agency warning the public to be attentive.
Temperatures early on Thursday morning dipped as low as -10C in the east, with almost all of France (besides the south coast) at 0C or lower.
The weather agency has suggested that temperatures stay above zero after Friday.
But it's not all pretty scenes of snowfall and frozen water fountains.
Things have been tight for grid operator RTE, which has been struggling to cope with the increase in power usage and has reported “unprecedented tension” over the last two weeks. Wednesday was the worst day for the company due to a mix of cold weather, production failures, and the fact that some nuclear reactors aren't functioning.
“If there had been some kind of hazard, like the loss of a nuclear power plant, then we would have probably had to bring in power cuts,” company spokeswoman Clotilde Levillain told Le Parisien newspaper.
It reported that due to the fact that so many French people use electric heaters in their homes, a temperature drop of a single degree Celcius during the winter can see a 2,400 MegaWatt increase in electricity consumption – the equivalent production of two nuclear reactors.