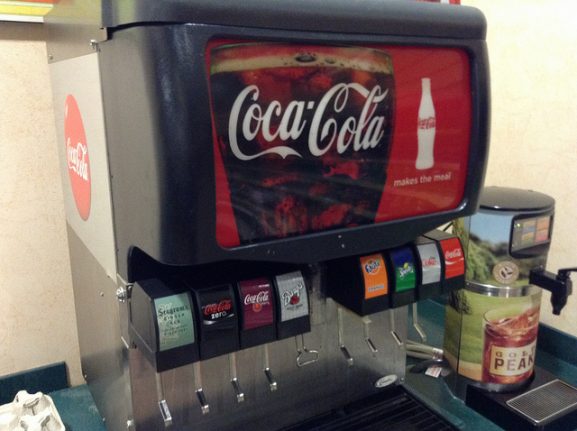 Photo: Mike Mozart/Flickr
The new law was published in the government's Journal Officiel website on Thursday and will come into effect on Friday.
It specifically states that it's illegal to sell soft drinks at a fixed price for an unlimited amount of drink, and illegal to offer unlimited amounts for free.
The ban applies to all soft drinks or soda “fountains” (see pic above) in places open to the public, including fast food-chains and restaurants.
It also bans refills on any flavoured or carbonated drinks, concentrates like fruit syrups, sports drinks, energy drinks, or essentially anything that comes with added sugar.
MPs voted the law in back in April 2015 in a move designed to help tackle obesity levels with sugary soft drinks seen as one of the major causes of the condition.
A recent health study revealed that half of French adults are now overweight.
The figures revealed that over the age of 30, some 56.8 percent of French men are overweight or obese and 40.9 percent of French women of the same age also tip the scales as obese or overweight.
“This excess weight has become a public health problem,” researcher Sébastien Czernichow told Le Figaro newspaper.
The ban on unlimited refills was backed by France's Health Minister Marisol Touraine from the outset.
“This habit is common in other countries and it is increasingly taking hold in France. I understand it can be attractive for young people who are offered unlimited sugary drinks, which contain an excessive amount of sugar or sweeteners,” she said when MPs voted in 2015. (AFP
France no stranger to banning junk food and drinks
France has long been at the forefront of banning products it considered harmful for the health, especially in schools.
In 2004, vending-machines were banned schools and only machines selling items of fruit and water were allowed to be in education premises.
Then in 2011 the government banned ketchup from school cafeterias and said chips or French fries could only be served up once a week.
“France must be an example to the world in the quality of its food, starting with its children,” said the then agriculture and food minister Bruno Le Maire at the time.
Figures from the market researcher Euromonitor in 2011 showed the French consume fewer soft drinks per person than any other country in Western Europe apart from Portugal.
While in the UK people drank an average of 84 litres of fizzy drinks per year, the average in France was only 45 litres.
The Americans consume four times as many soft drinks than the French, with an average of 170 litres a year.
In 2012, former New-York mayor Michael Bloomberg tried to prohibit the sale of soda in containers larger than half a litre but the Supreme Court ruled the plan unconstitutional.