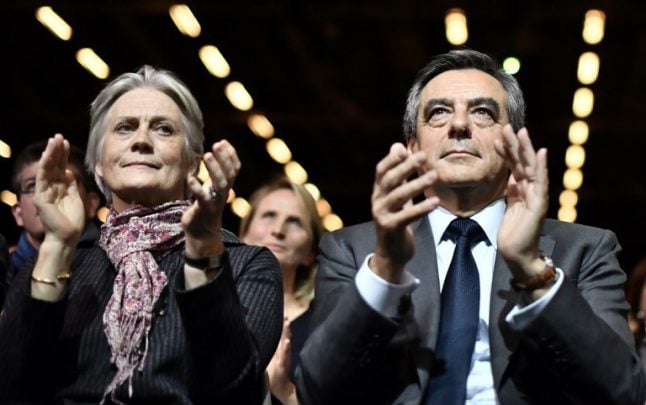 “Up until now, I have never been involved in the political life of my husband”, said Welsh born Penelope Fillon in October last year as she joined her husband on the campaign trail.

But according to the Canard Enchainé, the French newspaper known for dropping a few grenades into the lives of politicians, that statement might have been a little bit inaccurate.

The newspaper claims that Madame Fillon, who has been described as the “woman in the shadows”, was in fact paid as much as half a million euros of public money, to be employed first as her husband’s parliamentary assistant and then as a helper to one of her husband’s own aides.

Nothing illegal so far, as Fillon's people point out, except the paper alleges they could find no evidence of Penelope “being involved in the political life” of her husband. Other parliamentary aides claim never to have seen her.

Given the fact she’s British born the scandal enveloping the woman known as Penny and her husband has naturally made headlines on both sides of the Channel.

You can’t help but think that if a British politician running to be Prime Minister was found to have paid his or her French partner half a million quid to allegedly do, well, apparently not much, it would mark the end of their chances of getting into Downing Street. The tabloids would circle like vultures until the kill.

“But this is France,” political analyst Bruno Cautres from the Cevipov think tank tells The Local. “It’s not that much of a scandal because we’ve seen much worse than this.”

It’s worth a reminder that only a few months ago in France a former budget minister employed to fight against tax evasion was handed a jail sentence for… wait for it… tax evasion.

“We are in France, there are around 50 MPs who employ their wives, or children, or no doubt mistresses. It’s something we know exists, even if it needs reforming.”

In other words don’t expect François Fillon to issue a mea culpa and stand aside before disappearing into the “shadows” along with his wife, when he looks set to become the next president, according to opinion polls.

“He won’t pull out. He’s been elected in the primary. They could not afford that now,” says Cautres.

“All this confirms to the French people is what they already knew: politicians are good at telling them what to do, but not good at doing it themselves,” says Cautres.

In a recent survey by Cevipov it was revealed that 75 percent of French people believe their politicians are corrupt and not honest, Cautres says.

So while the hashtag #PenelopeGate was doing a roaring trade on Twitter on Wednesday as France’s social media masses both ridiculed and lambasted Fillon, they will probably quickly move on to a new scandal.

The reaction of most of the centre-right politicians in France has been to tell the media essentially: “nothing to see here, move on now please”. They refer to it as a “stink ball” (boule puante) typically dropped during election campaigns.

They blame the scandal not on Fillon or the system that allows MPs to legally employ wives, sons or daughters as aides, but on the fact that France is in the middle of an election campaign, and mud-slinging is just part of it.

Fillon himself says he won't even comment and blasted the “disdain and misogyny” of the media reports.

Cautres however accepts that Fillon won’t emerge totally unscathed given that he has declared war on wasteful public spending.

“There’s no doubt it’s bad for Fillon’s image as a self-proclaimed Mr Clean. It doesn’t look good after he has been telling the French of the need to be strict with finances and to respect the rules around debt and deficit.

“Half a million euros is a lot of money, especially in the economic context of France,” he added, noting that it comes at a time when Fillon's popularity seems to be taking a hit.

For Cautres the story in the Canard Enchainé is a sign that the battle to be the next president has really begun in earnest.

“The race starts now,” he said.

Fillon might have just given Marine Le Pen a decent head start.

That's the same Marine Le Pen who apparently owes the EU parliament €340,000 that was illegally paid to her aides.