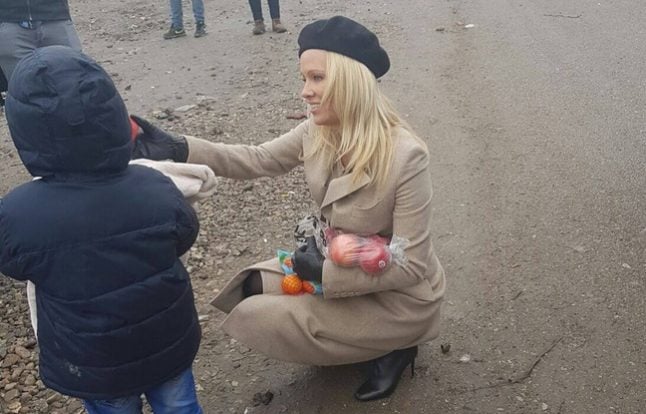 Photo: Peta France
Le Pen tried to visit the Grande-Synthe camp, just outside of Dunkirk, but was turned away.
Damien Careme, the local mayor and Ecological-Green Party (EELV) member, took to Twitter to say it was him who turned Le Pen away when she “dared to visit”.

“Humanity is a value that she ignores,” he wrote in the tweet, which attracted thousands of likes and retweets. Le Pen herself took to Twitter soon after her failed visit as well.
“This is democracy a la Francaise!” she wrote, adding that the camp apparently only let in politicians who were pro-immigration.

She later took aim at what she called the “crazy immigration policy of our successive governments”.
“We have to send illegals home and control our national borders if not the camps will be rebuilt.”
There are around 800 people who call the Grande-Synthe camp home, many of whom are trying to across the channel to the UK.
The Calais camp, which was not too far away from the Grande-Synthe camp, was shut down in October, seeing between 6,000 and 8,000 migrants spread across France and Europe.
However one guest that was welcomed into the Grand Synthe camp was former Baywatch star Pamela Anderson. Her trip was organised by animal rights charity Peta France.
She distributed books to migrants before sharing a meal with some of them at the camp. I am here in Calais helping asylum seekers deserving of protection.