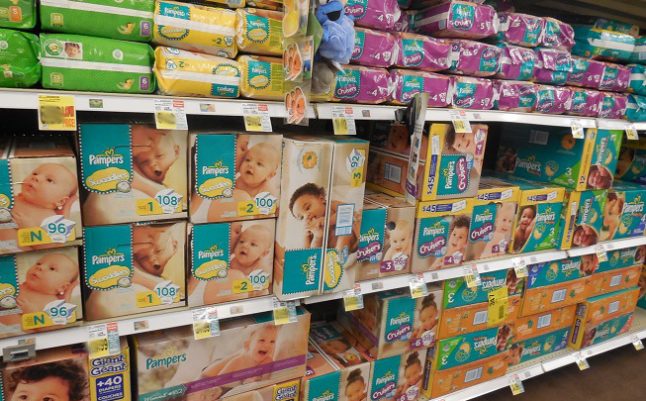 Photo: Parenting patch/Flickr
In a report published on Tuesday, the magazine 60 Million Consumers (60 Millions de Consommateurs) said its testers had detected potential carcinogenics in ten different brands of nappies – out of the 12 it tested.
These included organic nappies and those from leading brands, the group noted, in findings it said were “far from reassuring”.
“There is no risk assessment today in the case of nappies applied directly to the skin all day,” the magazine pointed out.
It said some nappies had traces of pesticides including glyphosate, the active ingredient of Roundup weedkiller.
The quantities of these potentially cancer-causing substances were extremely small, it said, but added that babies “were particularly sensitive to toxic substances”.
“Especially when these unwanted substances are in contact with the baby's bottom, a particularly sensitive part of their anatomy,” the group said.
While you'll have to buy the February issue of the 60 Millions Consumers magazine to get the full list of toxic nappies, the group revealed that they include Baby Dry from Pampers and the Eco Planete nappies from Carrefour supermarket, which were judged to be the worst offenders.
Nappies from the Leclerc supermarket and the brand Love & Green were given the all clear in the study.
The group called on Tuesday for nappy producers to be clearer in their advertising if their products contain such compounds.
The potentially harmful compounds in the nappies are ironically found in the chemicals there to protect the sensitive skin of the babies and prevent irritation, specifically in the petrolatum, which is commonly found in care products for its moisturizing qualities.
Indeed, 60 Millions Consumers reported in February last year that weedkiller had also been found in organic panty liners.
A separate French study in October found that Pampers nappies contained small traces of cancerous substances.
The carcinogenics have been linked to skin, lung, bladder, liver, and stomach cancer.
The head of the French health association Asef said at the time that while it was legal to have tiny traces of toxic substances, the contents of the nappies were “just too much from a moral perspective”.
The agency added that they believed there were no immediate effects for babies wearing the nappies, because if there were “the producers would have changed their manufacturing methods a long time ago”.